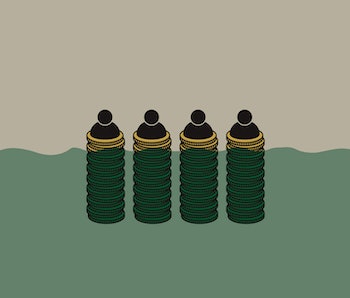 As more evidence of the negative effects of automation, surfaces, the idea of a universal basic income (UBI) has become increasingly popular. And new research shows that giving people $1,000 with no strings attached not only benefits them, but also benefits their community.

The area they were working in was very poor, so receiving $1,000 over that period of time was significant. The researchers surveyed thousands of residents in areas where households had received this cash injection and areas where households had not received it so they could determine the impact it was having. They found giving providing households with this money helped both the people who received it and the community around them.

Obviously, the people who received the money benefitted because they had more money to spend. On top of that, the businesses in their neighborhood benefitted from an increase in sales. The study claims every $1 that was invested grew the local economy by around $2.60.

"We’re underestimating the benefits of these sorts of programs

Dennis Egger, a graduate student at the University of California, Berkeley, who is one of the authors of the study, tells Inverse that the main lesson from this study is that giving people cash to spend as they please can have positive effects on the economy as a whole.

“We’re underestimating the benefits of these sorts of programs,” Egger says. “Cash transfers benefit not only the recipient but everyone else around them.”

The researchers found the experiment did not cause an increase in inflation, as some suspected it might, and the people who received this money did not start spending it carelessly. There was not a significant increase in participants spending money on things like alcohol or gambling. Egger says this same result has been found in similar studies.

Egger says everyone has different needs, and if you give them money to spend the way they want to spend it, they’ll be able to use that money to meet those needs. He says one person might need money to put their kid through school while another person wants to use it to expand their business.

“The idea of giving people money has some appeal because it’s very flexible and people can optimize or choose what is most relevant for them,” Egger says.

What this study appears to show is that you can simply just give people money and not only benefit their lives but see a return on that investment. Every dollar that was invested grew the economy by over twice that amount. If this were to hold true when such an experiment was attempted at the national scale, that would show this kind of program can really improve a nation’s economy.

Economic scholars have found the “fiscal multiplier,” or how much an investment grows the economy, to be around 1.8 in the United States. So every dollar we invest in individuals typically contributes to roughly $1.80 in economic growth. There are many differences between rural Kenya and the United States, so it’s not surprising the impacts of a certain type of investment are not exactly the same.

Even with a fiscal multiplier of 1.8, it would seem a program like UBI could be beneficial in America. There are clearly concerns about how it could impact inflation, how much it might add to the national debt and other issues, but it seems clear giving people money to spend as they please benefits them and their communities overall.

Egger says the effects of giving people cash they observed in Kenya likely wouldn’t be exactly the same if you attempted it in the United States, but he believes you would still see similar benefits overall.

“The general idea that cash transfers are almost by definition going to create spillovers and that these spillovers may be large and may be positive—I think that idea still holds true, even in the U.S.,” Egger says.

Presidential candidate Andrew Yang is a big fan of UBI. His proposal — what he calls the “freedom dividend” — would provide $1,000 per month for every single American. While the conditions in rural Kenya likely differ in some ways to rural America, it’s a study Yang might want consider highlighting.

Prominent rich person Mark Zuckerberg also spoke out in favor of UBI, using his platform during a 2017 Harvard commencement speech to do so.

More like this
Innovation
6.21.2022 11:00 AM
No, Google’s Deepmind isn’t on the verge of human-like reasoning
By Tristan Greene and Undark
Science
14 hours ago
Space dust from Venus could help clean Earth’s air
By Alexander James and The Conversation
Entertainment
13 hours ago
Marvel’s most mysterious Phase 4 trends is setting the MCU up to fail
By Dais Johnston
Related Tags
Share: