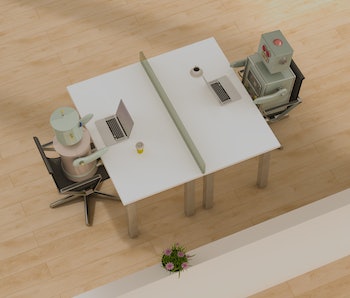 When you think about automation, there’s a good chance you think about robots in a factory or a warehouse. That’s partially because a lot of automation that is starting to be utilized more and more has to do with robotics. However, as a new report from the Brookings Institute explains, it’s not just blue collar jobs associated with physical labor that are under threat.

Developments in robotics will contribute to the loss of largely blue-collar jobs, but will also AI threaten the high-paying jobs many of us are striving to one day obtain, according to the report. Robert Maxim, a research associate in the Metropolitan Policy Program at Brookings, tells Inverse automation is going to impact pretty much every kind of job.

"“Most workers in the U.S. economy are going to see a disruption."

See also: What will life look like when most jobs are automated?

“Better-paid, white-collar occupations tend to be the most exposed. A secondary group of exposure are higher-skilled production and manufacturing factory jobs,” Maxim says. “Those are kind of the two broad categories that are most exposed.”

Maxim says that the jobs that are least likely to be threatened by AI are jobs that require human traits that a robot or AI cannot replicate, like empathy, intuition and creative thinking.

“What will not go out of vogue is the ability to work with other people, manage people, do teaming and thinking about use cases for new technologies,” Maxim says. He says jobs in caregiving, for example, will be safe because they require intrinsically human qualities. If you have to be good with people to do the job, it’s less likely robots or AI are going to replace you any time soon.

Ironically, since women have historically been pushed away from jobs in tech and science and pushed toward they healthcare, caregiving and similar fields, women could be less affected by developments in AI. The report claims women’s involvement in “education, health care support, and personal care services appears to shelter them” from the effects of AI.

Maxim isn’t painting a doomsday scenario for folks out there who have fought their way to the top of industries like finance or technology, though. He says because the people in these careers tend to be well-educated and have acquired many skills over the course of their career, they’ll be best suited to adapt to change in their industry and find other kinds of work.

See also: Why a new job automation report is worse for African-Americans than other groups

“A lot of the white-collar workers who are exposed to AI will probably be the ones that are best equipped to make the adjustment,” Maxim says. He says the people that will be most hurt by AI will be from jobs in factories, warehouses, energy plants and similar locations where they have a well-paying blue-collar job, since these people tend to have less education and fewer relevant skills.

Maxim believes we need to focus on helping those who aren’t as well-educated and will be hurt most by developments in AI when we consider policies that could prevent AI from having a terrible effect on many people’s lives. He says we should incentivize companies to retrain these people, instead of just laying them off, possibly by offering these companies tax credits to do this. We should also consider where we invest our resources.

“We should be investing in these new technologies in a way that actually develops new jobs and new opportunities for areas that have been previously hollowed out by rounds of automation and globalization-based displacement,” Maxim says.

AI is developing quickly, and it will create some new jobs as it displaces others, so people that have been hurt by automation should get some of the jobs it creates. Places like the Rust Belt have already been hit hard by automation, and we don’t want things to get any worse for them.