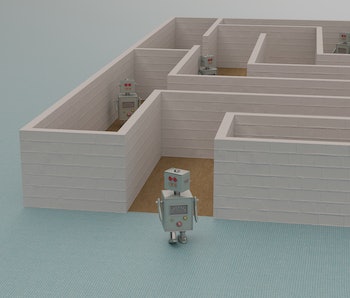 Experts estimate about a quarter of American jobs could soon be automated. Looking further down the line, we may see a majority of jobs being done by robots. If 60 percent of jobs were to be eliminated, for example, a tremendous amount of people would be out of work, and we’d very likely have to adopt a program like Universal Basic Income (UBI). We don’t yet know how these changes will impact society, but a lot of people are trying to figure out just that.

Martin Ford, a futurist and author of “Rise of the Robots: Technology and the Threat of a Jobless Future,” tells Inverse that a majority of jobs could be automated or mostly automated within 20 years or so.

“I think a very large number of jobs are going to be impacted — automated or deskilled. Eventually, it might be a majority,” Ford says.

Ford says just 20 percent of jobs disappearing would have a “staggering impact” on society and the economy. He says the jobs that will be safest, in terms of automation, will be the ones that require some level of creativity.

Richard Baldwin, a professor of international economics at the Graduate Institute of International and Development Studies in Geneva, tells Inverse that jobs that aren’t completely automated will still be affected by automation.

“Almost all occupations will still require some people to do the tasks that can’t be automated or offshored,” Baldwin says. He believes jobs that require human skills like empathy, motivating people, dealing with unexpected situations, curiosity, innovation, ethics will not be automated.

There are also simply jobs that won’t be automated for a long time because it will take so long for the technology to develop, Ford says. He thinks it would take a robot “like C-3PO” to replace an electrician, for example.

Once there are fewer jobs, and some kind of program like UBI that is keeping people financially stable, many believe we’ll simply have more time to do the things we want to do that don’t necessarily earn us much or any money. Presidential candidate Andrew Yang says on his campaign website that UBI will “enable all Americans to pay their bills, educate themselves, start businesses, be more creative, stay healthy, relocate for work, spend time with their children, take care of loved ones, and have a real stake in the future.”

Yang’s UBI plan isn’t the only one in existence. There are many ways a UBI program in America could run, including replacing social net programs currently in place like Social Security or being given out in addition to them.

“Eventually you might see a post-scarcity environment where people spend less time focused on their livelihood and more on other pursuits,” Ford says. People might volunteer more, focus on artistic pursuits, go back to school or take care of those who need to be taken care of.

“What will we do? Well, things that are rewarding to us personally,” Baldwin says. “I see people spending insane amounts of times on things that don’t pay.”

The other benefit of automation will be that the things we buy will be cheaper. If you don’t have to pay someone to produce a commodity, then that drives the cost down significantly. Ford says there will be some things that may not go down in price because of a lack of automation in a certain industry, like real estate, healthcare and education.

In terms of politics, automation could mean that corporations will have less power over lawmakers. One reason corporations have so much power is that they employ so many people. If a corporation mostly employs robots, that takes some of its power away.

“The power that the fossil fuel industry has—it’s not just because they have a lot of money, it’s because they control employment,” Ford says.

More like this
Entertainment
10 hours ago
House of the Dragon Episode 6 deleted scene raises questions about Daemon
By Mónica Marie Zorrilla
Innovation
9 hours ago
Horrifying: Robots may have just gained a creepy new skill
By Molly Glick
Culture
8 hours ago
10 years ago, we got a perfect time travel movie — with one big plot hole
By Ryan Britt
Related Tags
Share: