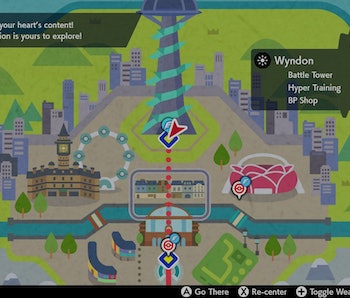 After besting Leon, capturing Zacian or Zamazenta, and playing a few Max Raid Battles you might wonder what else you can do in Pokémon Sword and Shield. Surely there has to be more post-game content, right? There is! You can test your trainer prowess at the Battle Tower.

It’s Sword and Shield’s final frontier, more challenging than practically anything else in the game. Here, you’ll compete in battle after battle earning BP, which can then be spent on EV Training tools, breeding items like the Destiny Knot, IV altering Bottle Caps, and so much more.

How to unlock the the Battle Tower

To unlock the Battle Tower, you must complete the Main Story and the legendary quest which concludes in capturing Zacian or Zamazenta. Once that’s done, simply stroll on over to Rose Tower in Wyndon City. You’ll notice it has been refurbished and renamed by Leon. It’s now called the Battle Tower. Go ahead, walk on in, complete a few matches and unlock the IV Checker. But there’s still a whole lot more to do at the Battle Tower.

Ranking up at the Battle Tower

At the Battle Tower, you can compete in single or double battles to earn prizes. Every victory will help boost your placement in the building’s ranking system. There are eleven total ranks and five overall tiers.

Each time you hit a new tier, you’ll be rewarded with BP, Rare Candies, and other goodies. You’ll also always face Leon immediately before reaching a new tier. The tiers can be run through twice: once for single battles, and another time for doubles. Reaching new tiers will take longer if your matches repeated end in losses or forfeits. It’s possible to lower in rank if you lose too frequently, but you’ll never fall out of a tier entirely. Once you go Poke-ball (or any other tier), you don’t go back.

In single battles, you’ll do one on one battles, like classic Pokémon fights with a small twist. You’re only allowed to take three Pokémon with you, rather than the classic six.

Double battles are two-on-to clashes where you’re allotted a party of four to take on opposing teams. Your entire team will be healed in full after each battle.

You will keep your progress if you decide to leave the tower between matches. Feel free to take a break and hit up the Wild Area. Leaving will reset your team, freeing you to play with different Pokémon upon returning. You’ll earn 2BP for every victory. Separate from the tier system, The Battle Tower will also reward you with small goodies after every handful of wins.

Don’t worry about certain Pokémon being under-leveled, all Pokémon will automatically be scaled to LV 50 for the duration of your time in the tower. However, if that’s not enough to feel confident in your Pokémon, the Battle Tower also offers rental teams through a man in green found at the counter. He has five types of teams which you may borrow, and every Pokémon on these teams is at LV 50 by default.

Out of the five, the Skill Team is by far the best. If you’re iffy about your Pokemon, These teams will certainly be a huge boon on your path to victory.

Okay, but what else can I do at the Battle Tower?

Similar to a suburban mall, the Battle Tower offers much more than just fighting. There’s a woman on the left side of the lobby who will give you the legendary Pokémon Type: Null. She’ll also provide you with the items to change its abilities. You can exchange your BP for items in the Battle Tower lobby and Hammerlocke’s Pokémon center. These items include Mints, a tool new to Generation 8, which allows you to change your Pokémon’s nature.

Lastly, you may increase any LV 100 Pokémon’s stats through Hyper Training. It’s a rigorous training method completed by giving bottle caps to the fellow behind the counter on the right. Go even righter than that fellow and you’ll find a woman against the wall who sells high-quality TMs.

Now, go forth, enjoy the Battle Tower and the wonderful world of Pokémon!

Pokémon Sword and Shield are now available in stores everywhere

More like this
Gaming
12 hours ago
Everything you need to know about Dragon Quest Treasures
By Robin Bea
Gaming
10 hours ago
Here's exactly how long it takes to beat Fire Emblem Warriors: Three Hopes
By Joseph Yaden
Gaming
6.28.2022 6:22 PM
10 intriguing Switch game reveals from the Nintendo Direct Mini
By Robin Bea
Share: