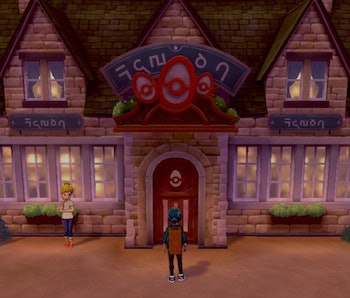 Despite some pre-release misgivings within the fan community, it seems Pokémon trainers the world over are feeling the love for Sword and Shield, which has already become the fastest-selling Nintendo Switch game. And when two Pokémon love each other very much — or are exceptionally powerful — their trainer might select them to breed even stronger children. If you’re looking to make the most of your Pokédex and start reproducing, you’ll want to get your hands on a Destiny Knot.

Giving the Destiny Knot to a Pokémon you intend to breed will insure their offspring will inherit at least five of the parents combined 12 IV points. (Each Pokémon the same six stats, each with different values: HP, Attack, Defense, Sp. Attack, Sp. Defense, and Speed. If you want to know how to get the IV Checker in Sword and Shield, check out our guide.) Using a Destiny Knot offers a significant boost over the standard three stats you’d inherit through normal breeding, leaving fewer elements to chance.

The item can be combined with a stat specific IV-enhancing item, like a Power Brace to ensure a specific stat is passed down, along with four others. Alas, there’s no way to control the sixth IV, which remains completely random. The Destiny Knot can help you breed the perfect Pokémon for the competitive scene or one to simply dominate Sword and Shield’s post-game content. Or even just amazing trade fodder.

Where can I find the Destiny Knot in Sword and Shield?

First things first, you must beat the main story before you can obtain a Destiny Knot. Once you’ve done that, head to the Battle Tower and start challenging trainers. You’ll need to defeat enough trainers to accrue 10BP, a currency that can only be obtained at the Battle Tower.

After earning the required funds, head to Hammerlocke’s Pokémon Center (near Raihan’s gym). Once there, go to the Pokémart side and speak with a woman in white, dressed similarly to Watt Traders found in the Wild Area. She sells Destiny Knots for 10BP each. She’ll sell you as many as you can afford, enough to fill the numerous nurseries available in Sword and Shield with combat-primed offspring.

Okay, maybe you hate breeding Pokémon, but you still want to put the Destiny Knot to good use. Lucky for you, the Destiny Knot also has combat applications. By holding the item, if your Pokémon becomes infatuated with another Pokémon in battle, the Pokémon they’re in love with will love them back. The battle use is very niche and only really works as a counter to charm. Either way, it’s understandable how it has become such a coveted item in the world of Pokémon breeding.

Pokémon Sword and Shield are currently available in stores everywhere.