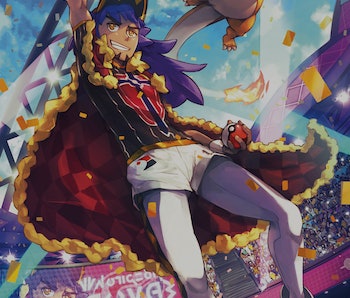 You’ve finally done it! You’ve made it through the numerous gym challenges in Pokémon Sword and Shield like Milo and Nessa. You’ve defeated your rivals multiple times. You’re hot off having faced Galar’s third legendary Pokémon, Eternatus, and you came out victorious. It seems like everything’s coming up Milhouse right now. Let’s hope that streak continues for your final battle of the main story. This time, you’ll face the Galar region’s champion, Leon. Much of the game’s narrative talks up Leon’s strength, and it wasn’t for naught: the battle against Leon is a doozy. But don’t worry, you’ll have plenty of time to prepare.

After defeating Eternatus, you’ll be called to challenge Leon for the title of Champion. Luckily, there’s a gap between these two matchups. This interval will allow you to take as much time as you need to adjust your party and catch some new Pokémon before testing your mettle against the man himself.

So what kind of team are you preparing for? Leon’s squad varies depending on the starter you chose. Unlike his little brother Hop, Leon understands type advantages (unfortunately) and will adjust his team based on your worst match-up. His Pokémon are also leveled to their 60s, far stronger than anything you’ve faced in Pokémon Sword and Shield thus far.

If you chose Grookey, Leon has:

If you chose Scorbunny, Leon has:

If you chose Sobble, Leon has:

No matter your version of the game or starter, he’ll always Gigantamax his Charizard. Watch out for that, as it packs quite a punch. Try to match it by Dynamaxing your own Pokémon against it. We suggest bringing a few dark-type Pokémon to counter Leon’s two ghost-type Pokémon. Grimmsnarl, the final evolution of Impidimp, would do nicely.

Once you’ve defeated Leon, you’ve basically won the game! All that’s left is to finally catch ‘em all and complete some post-game content. The first piece of post-game content you should do is obtain a Charmander of your very own!

Pokémon Sword and Shield are currently available in stores.