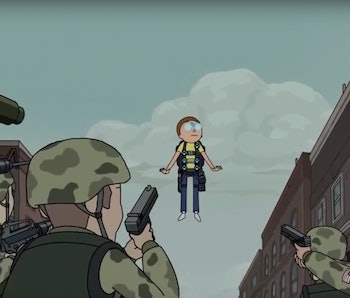 We all knew that some kind of “Akira-type situation” was coming to Rick and Morty after a clip from the Season 4 trailer revealed a scene behind the mall where Morty beats up some bullies with advanced gadgets, but it wasn’t until the Season 4 premiere aired Sunday night that any of us came to appreciate the real scope of how much Episode 1, “Edge of Tomorty: Rick Die Rickpeat,” pays homage to the beloved 1988 anime film Akira.

If you’ve come looking for answers to all your Akira-related Rick and Morty questions, you’re in the right place.

Years after a singularity destroys Tokyo in the world of Akira, the society of Neo-Tokyo is plagued by gang warfare and terrorism, and it’s on the verge of collapse when a young gang member by the name of Tetsuo experiences visions of the future and develops supernatural psychic powers. He becomes an unstable egomaniac, eventually going on a rampage through the city fighting gang members, the military, and anyone who stands in his way. As his powers grow outside of his control, he mutates into a horrifying blob that consumes all matter and threatens the entire world.

If you’ve already seen the Rick and Morty Season 4 premiere, you can see just how many similarities there are, to the extent that the story resembles Akira more than it does Edge of Tomorrow.

Under the influence of the Death Crystal, Morty uses knowledge of his impending death to move towards what he thinks is a fate with his long-time crush Jessica as the love of his life. (In the vision, Morty sees her saying she loves him on his deathbed.) Because Rick is technically dead at this point and traversing various alternate realities in the bodies of various clones, Morty is able to steal enough of Rick’s gadgets to essentially transform him into a super-powered villain.

To recap: Plagued by visions, a troubled teenager with feelings of inadequacy goes mad, and after developing superpowers, mutates into a huge blob and nearly destroys the world. That generalized plot is the same in Akira and this Rick and Morty episode. The disturbing scene where some kind of sci-fi ferrofluid envelops Morty’s body is a direct homage to Akira’s final sequence where something similar happens.

Some police see Morty fighting other kids, and they radio the incident in as the aforementioned “Akira-type situation.” Later, when Morty’s actions make international headlines on news stations around the world, various news tickers refer to him as “Akira boy.” To cap it all off, in the episode’s final scene, Jerry accuses Rick of “turning [Morty] into an Akira.”

“I don’t want to see any more anime stuff happening to my son!” Jerry also says to Rick, mispronouncing words like “anime” and “Akira” in a way that makes him sound like some kind of foolish Boomer shamelessly trying really hard to sound cultured.

Next time this classic anime series comes up, hopefully you’ll have something clever to say about it (thanks to Rick and Morty). Just don’t mess up the pronunciation like Jerry would.