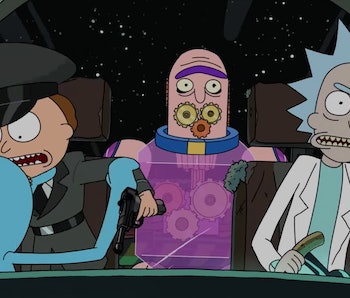 If Rick and Morty Season 3 established Evil Morty as the show’s greatest villain, and one that should return at some point in Season 4 to try once again to take down Rick C-137. If our theory about the Season 4 premiere is correct, however, then a new hero might rise to the occasion. Could Morty C-137 become a total badass in the Season 4 premiere? And will it last long enough for him to take down Evil Morty?

On October 21, Adult Swim announced the titles for the first five Rick and Morty Season 4 episodes in a video poking fun at Stranger Things. The premiere is called “Edge of Tomorty: Rick Die Rickpeat,” a reference to Edge of Tomorrow: Live, Die, Repeat starring Tom Cruise and Emily Blunt. The vague episode description — revealed in a Twitter thread that same week — is cryptic, but one line is telling: “Morty goes nuts this time dawg. Rick does stuff. Season 4 premiere broh.”

Of all the scenes shown in the Season 4 trailer, there’s one at about the 0:38 mark where “Morty goes nuts.” Shortly after we see Summer and Beth dueling and then a ton of Meeseeks wreaking havoc, we see Morty fighting two teenagers with some gadgets. As the police approach, one of them says, “We’ve got an Akira-type situation going down behind a mall.”

Morty has some kind of advanced handgun in a holster on his belt and he’s just some something to stick one kid against a huge dumpster with a tan-colored blob. Another kid approaches with a baseball bat, but Morty tosses an orb into the air that absorbs him like a Poké Ball. Something that’s easy to miss here: Morty has some kind of blue gem or device on his forehead (visible above).

We’re willing to bet that this gemstone or device is what makes Morty go “nuts,” or it might be keeping him alive. An alternate explanation could be how it connects to the movie this episode might be loosely based on.

In Edge of Tomorrow, Tom Cruise is a publicist for the human military in the midst of a war against an invading alien force. When he’s exposed to the blood of an alien, he gets caught in a time loop, repeating the same day thousands of times over while retaining his memories and experiences — it’s like Groundhog Day for muscle memory in a hard sci-fi story.

What if Morty gets caught in some kind of time loop, repeating the same day over and over again? He might claim some of Rick’s devices for his own use, or even spend time inventing his own. Having to repeat the same day over and over again might be precisely what drives Morty “nuts.” If Morty’s experiences in the premiere episode even remotely resemble this, then it would make him the perfect person to take down Evil Morty later this season — assuming Rick and Morty are on a collision course with their nemesis.

Rick and Morty explored fractured time in the Season 2 premiere, so it feels totally possible that Season 4 might do something similar.