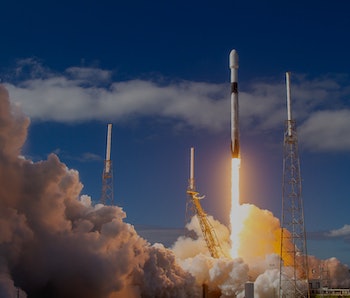 SpaceX’s Starlink took to the skies on Monday, and it left an impressive trail in the sky.

As the Falcon 9 soared up from Space Launch Complex 40 at the Cape Canaveral Air Force Station in Florida, it marked a new step in SpaceX’s efforts to start a new business venture. The rocket lifted up 60 Starlink satellites, tiny crafts that could one day orbit the Earth in their thousands, providing ultra-fast, low-latency internet access almost anywhere in the world.

It could help SpaceX, and CEO Elon Musk, achieve some of their most ambitious goals. The company wants to build a city on Mars and establish a planet-hopping society, but it needs money to fund its grand ventures.

SpaceX is aiming to build a city on Mars, a venture that Musk has suggested could cost between $100 billion or $10 trillion and require sending up one million tons of cargo. The company is working on the Starship, a fully-reusable rocket that could cost just $2 million per launch to send up 100 tons — a steep drop from the $62 million price tag for the Falcon 9. But the entire rocket launch industry, where SpaceX currently makes its money, only provides around $5 billion annual revenue.

Internet connectivity could be the key. Musk has projected that the entire industry brings in around $1 trillion revenue per year. If SpaceX could bring in three to five percent of that, it would massively expand its annual revenue and receive the funds it could use to build a Mars city.

With that in mind, SpaceX’s Monday launch could be far more than an impressive display of rocket prowess.

With the second Starlink launch, SpaceX has now launched 120 satellites for the constellation. The first launch was in May 2019, and Musk subsequently employed the first lot to send a tweet. SpaceX is estimating that the service will go online for the northern United States and Canada after six launches, sometime in 2020. The service could go live for a large proportion of the world in 2021, after 24 launches.

The eventual constellation could number in the thousands. SpaceX filed a plan with the FCC in April 2019 to fly over 4,000 crafts in orbit, most of which would orbit at a low altitude of around 550 kilometers. This low orbit should enable latency of just 15 milliseconds.

This would rival the total number of satellites in space right now including inactive ones, a figure estimated at around 5,000. But SpaceX is thinking bigger: it asked for permission last month to fly 42,000 satellites.

Monday’s launch was also impressive for its rocket-reusing accolades. It was the fourth time the same booster had supported a mission. The rocket got its first outing with the Iridium-7 flight in July 2018. The second launch came with the SAOCOM-1A flight in October 2018. The third was the Nusantara Satu flight in February 2019.

It was also the first time SpaceX re-used the same fairing, the protective cover that helps the payload successfully reach space. This component was previously used with the Falcon Heavy on the Arabsat-6A mission in April 2019. SpaceX has pushed to collect both halves of the cover after a mission, fitting two ships with nets in a bid to catch them as they fall to Earth. The company opted not to use the ships for Monday’s mission.

More like this
Innovation
8.4.2022 11:30 AM
Look: 9 stunning images reveal a retired satellite's dynamic views of Earth
By Jennifer Walter
Science
8.11.2022 5:00 PM
Look: A deep-sea expedition just captured these incredible views of life underwater
By Jennifer Walter
Innovation
21 hours ago
Want to take a road trip in your electric vehicle? Prepare to go off track
By Molly Glick
Share: