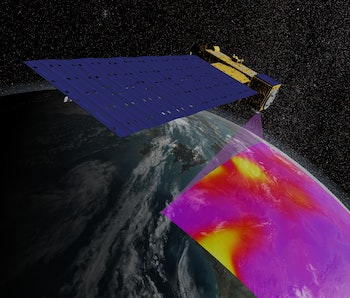 To know how best to address air pollution, scientists need to gather as much information as possible about the greenhouse gases and pollutants in our atmosphere. Low-orbit satellites enable them to measure toxic gases from above.

Nitrogen nitrogen dioxide, or NO2, is one such pollutant. To get a sense of NO2 levels in the air above the United States, researchers measured NO2 levels in 30 cities across the country. The data, published Thursday in the journal Science, shows that overall NO2 across the US is decreasing. That suggests US pollution regulations are working, the researchers say.

The researchers used a satellite-mounted tool called an Ozone Monitoring Instrument to measure NO2 over time and the pollutant’s life expectancy in the atmosphere. Knowing this information is important for mitigating pollution, says study lead author and University of California, Berkeley professor Ron Cohen.

“The amount of NO2 in the atmosphere is an important control over air pollution, and it’s one of the key ingredients in the chemistry of the atmosphere,” Cohen tells Inverse.

NO2 is typically produced as a result of combustion, often coming from cars, trucks, and power plants. Some US cities emit more of the gas than others, according to the study; New York City is a particularly potent hotspot. That wasn’t a surprise to Cohen, who grew up in New York.

But concentration patterns of NO2 can look unusual. The compound’s lifetime, or how long it takes it to disappear from the atmosphere, isn’t linear. Cohen explains what that means. “There’s not a simple one-to-one relationship between lifetime and concentration,” he says.

With a linear lifetime, the relationship is simple: Double the amount of a gas and it takes twice as long to disappear from the atmosphere. But NO2 is different; sometimes doubling the gas does double the lifetime, but in other instances it cuts it in half. It depends on the concentration, location, and atmospheric chemistry.

Understanding that tricky relationship is important for cutting down levels of NO2 overall.

“We’d like to be the scientists who can give good policy advice,” Cohen says. When talking about emissions reductions, it’s important to understand the role of NO2, “because the lifetime complicates your story.”

When it comes to policy, the US has, to an extent, successfully mitigated air pollution, Cohen says. His research, as well as past findings from NASA, shows the Clean Air Act, made law in 1970 and amended in 1990, has been hugely successful at this. Some call it the most cost-effective regulation in the country, Cohen says.

That’s because dirty air causes major health problems for people, including asthma, fertility issues, and even heart attacks and strokes. Those all have economic impact, and preventing them saves money. Polluted air can also cause visibility issues, slowing global transit and technology.

Going forward, it could be that the best way to regulate emissions is through strategies that tackle multiple pollutants at once, Cohen says. Electric cars, for example, reduce CO2, a greenhouse gas, because they’re more efficient than regular cars.

At the same time, they temper NO2 levels. It’s easier to reduce emissions from major sources like factories or oil and gas plants sources because the problem is centralized and the buildings can use emissions-cutting technology.

More work is needed to understand how NO2 and other gas levels change in the long-term. In the next few years, scientists plan to launch even more advanced satellites to get a more precise picture of the pollutants in our atmosphere.

The Ozone Measuring Instrument used in the latest research is a satellite that orbits Earth measuring NO2 levels and reporting back once a day. But a new tool to be launched soon, dubbed the Tropospheric Monitoring Instrument, will take similar measurements once an hour.

“The fact that we’ll have measurements every hour, Cohen says, “will allow us to ask a set of questions that we’ve never been able to ask before.”

Abstract: NOx lifetime relates nonlinearly to its own concentration; therefore, by observing how NOx lifetime changes with changes in its concentration, inferences can be made about the dominant chemistry occurring in an urban plume. We used satellite observations of NO2 from a new high-resolution product to show that NOx lifetime in approximately 30 North American cities has changed between 2005 and 2014 in a manner consistent with our understanding of NOx chemistry.

More like this
Science
5.18.2022 8:00 PM
Pollution is responsible for one in six deaths each year — and it’s getting worse
By Tara Yarlagadda
Science
5.13.2022 1:49 PM
Watch: Shocking footage shows 2 North Carolina homes claimed by rising seas
By Jennifer Walter
Science
11 hours ago
Look: Hidden fossils reveal a microscopic creature that may be resilient to climate change
By Jennifer Walter
Share: