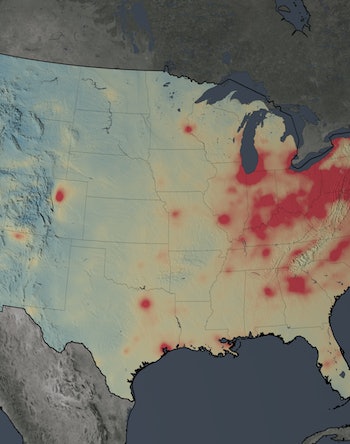 The findings, which were determined by global satellites monitoring 195 cities around the planet, point to the real benefits of regulation.

“These changes in air quality patterns aren’t random,” lead researcher Bryan Duncan, of NASA’s Goddard Space Flight Center said announcing the findings. “When governments step in and say we’re going to build something here or we’re going to regulate this pollutant, you see the impact in the data.”

Unfortunately, the improvements weren’t across the board. If you live in Europe, Japan, or the U.S., chances are your air quality improved.

China and to a lesser extent, India, saw increased levels of air pollution:

It comes down to nitrogen dioxide (NO2) — the yellowed gas commonly emitted by cars, power plants, and industrial activity, and typically choking major cities in bogs of urban smog.

In America, nitrogen dioxide decreased by 20 to 50 percent over the decade in question, while in Western Europe concentrations were down by as much as 50 percent, mostly due to regulations on emissions.

Meanwhile, China’s concentration grew as much as 20 to 50 percent, along with its status as a manufacturing hub.