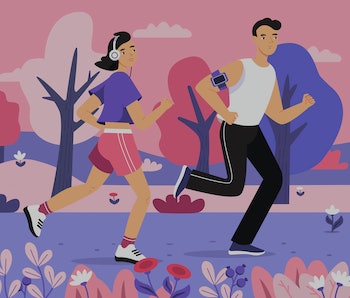 Building an additional 35 minutes of exercise into your day may not only affect your physical well-being — it could also have serious benefits for your mental health.

Adding in the extra activity significantly lowers the risk of depression and improves people’s resilience to the condition, according to a new study.

Depression is the leading cause of disability worldwide, with more than 300 million people affected by the condition.

In this study, the researchers looked at the genomic data and electronic health records for 7,968 people. This information also allowed the team to calculate each person’s polygenic risk score for depression — a measure that indicates an individual’s likelihood of having depression based on their genes. They also looked at whether an individual had reported experiencing depression and how much exercise they took on a weekly basis.

They found that, for people who had experienced depression and who engaged in at least four hours of activity a week, engaging in just 35 minutes extra activity every day lowered the odds of developing a new episode of depression by 17 percent.

Conversely, the prevalence of depression was highest among participants who did the least exercise — especially those who reported zero to 1.1 hours of activity per week.

“While our study doesn’t pinpoint exact mechanisms, we see that genetic factors increase risk of depression, whereas being physically active seems to reduce risk in an equal, but opposite, direction,” lead author Karmel Choi, a postdoctoral fellow at Harvard University, tells Inverse. “This could mean more protective factors on board to shift the overall pendulum from risk to resilience.”

The findings — and the fact that they hold true even for people at genetic risk of depression and for those who have experienced depression before — are surprising and encouraging, Choi tells Inverse.

“Because past depression is a strong predictor of later depression, this gives us even more evidence that physical activity may be a powerful tool for beating the odds against future depression,” she says.

The results build on an earlier study, which found that physical activity is generally an effective prevention strategy for depression. This new study is unique in the fact that it specifically examined the effect of exercise on people genetically at risk for developing depression. That’s important, Choi says, because depression often runs in families and there’s a misconception that if someone is predisposed to the condition, there might be nothing they can do to prevent it.

“Our findings suggest otherwise,” Choi argues. “We saw that being active still makes a difference regardless of genetic risk. This study may help inform the discussion between patients and their health care providers about what pre-existing risk factors they have onboard and, importantly, what they can do about it.”

Background: Physical activity is increasingly recognized as an important modifiable factor for depression. However, the extent to which individuals with stable risk factors for depression, such as high genetic vulnerability, can benefit from the protective effects of physical activity, remains unknown. Using a longitudinal biobank cohort integrating genomic data from 7,968 individuals of European ancestry with high‐dimensional electronic health records and lifestyle survey responses, we examined whether physical activity was prospectively associated with reduced risk for incident depression in the context of genetic vulnerability.

Methods: We identified individuals with incident episodes of depression, based on two or more diagnostic billing codes for a depressive disorder within 2 years following their lifestyle survey, and no such codes in the year prior. Polygenic risk scores were derived based on large‐scale genome‐wide association results for major depression. We tested main effects of physical activity and polygenic risk scores on incident depression, and effects of physical activity within stratified groups of polygenic risk.

Results: Polygenic risk was associated with increased odds of incident depression, and physical activity showed a protective effect of similar but opposite magnitude, even after adjusting for BMI, employment status, educational attainment, and prior depression. Higher levels of physical activity were associated with reduced odds of incident depression across all levels of genetic vulnerability, even among individuals at highest polygenic risk.

Conclusions: Real‐world data from a large healthcare system suggest that individuals with high genetic vulnerability are more likely to avoid incident episodes of depression if they are physically active.