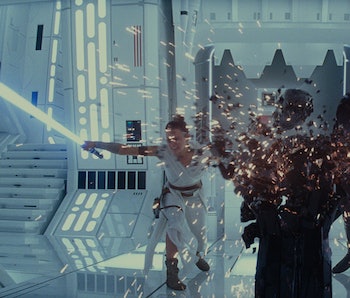 The final Star Wars: The Rise of Skywalker trailer offered plenty of juicy new details for fans to speculate about, including Rey destroying Darth Vader’s mask (or a statue of it) alongside Kylo Ren. However, in addition to the lightsaber she’s wielding, fans were drawn to the mysterious dagger in her other hand. Now, a clever new theory offers a possible explanation for why Rey has the dagger, and it has everything to do with Emperor Palpatine’s alleged “dyad” plan to resurrect himself in Episode IX.

It wasn’t that long ago that Making Star Wars editor Jason Ward revealed that Emperor Palpatine’s final plan involved Kylo Ren and Rey coming together to form a “dyad.” Once they’re in the same room, he would be able to use them to “siphon” Force energy and rejuvenate himself. Recent leaks have suggested the dyad plotline might have been scrapped during production.

With that in mind comes a theory from redditor u/Gw4za, who suggests that Palpatine hires a Sith assassin (allegedly named Ochee) to murder Rey’s parents with the Dagger of Mortis. You remember the story of Mortis, right? In The Clone Wars, which director Rian Johnson watched while writing The Last Jedi script, Mortis is a spiritual realm that the Force passes through.

Now, this theory also plays into the rumor that Rey is, in fact, Palpatine’s granddaughter. However, to groom her for his plan, Palps had her parents killed off. Long story short, Palpatine kills Ochee after he’s done with his assassin mission, but Luke, having been tipped off by Anakin’s Force ghost, is able to retrieve the dagger. Yeah, Anakin’s ghost is in play too, but that part might really be true.

Now, it’s best to remember that for this theory to work, the dyad plan has to be in play. But, according to recent leaks from well-known Reddit leaker JediPaxis, that may no longer be the case. Still, nothing’s off the table quite yet.

All that said, here’s the most interesting part:

Through his travels and studies, Luke deduces that the threat to balance might be from the offspring of Palpatine. After Ochee murders Rey’s parents, Luke sees Rey but couldn’t possibly kill an innocent child. So, he’s always known Rey’s identity.

That’s fascinating and connects back to the popular theory that suggested Han, Leia, and Luke had all known Rey’s identity long before meeting her in The Force Awakens. Additionally, it’ll be Luke who gives Rey the Dagger of Mortis in hopes that she’ll use it to destroy Palpatine once and for all and that’s why she’s carrying it in the Episode IX trailer.

And, as luck would have it, the Dagger of Mortis is supposedly sacred to the Sith and can strip someone of their immortality. You see where we’re going with this, right? If Palps is trying to use Rey to rejuvenate himself, it’s possible she is only able to stab him after he uses her first. But, once Rey is able to get close enough to with the dagger to skewer Palps, poof! He’ll be gone for good.

Now, we know what you’re thinking: how could all of this possibly be explained in The Rise of Skywalker? Well, on one hand, the movie is the longest Star Wars film to date, so there’s plenty of time to introduce complicated artifacts from the cartoons. However, if this theory proves at all true, which, to be honest, feels unlikely given how extremely detailed it is, it would be better told in flashbacks rather than exposition, lest the audience falls asleep.

Ultimately, the best-case scenario is that Rey happen upon the Dagger of Mortis while she, Finn, and Poe are in some undisclosed location, sans Luke’s help. It’s also possible they venture to Mortis to get it, which could then confirm that Rey is indeed the mythical Daughter diety who hails from Mortis and represents the Light side of the Force.

Regardless of how Rey gets a hold of that dagger, though, it’s clear that it may play a key role in Palpatine’s defeat. And if this theory is true, then the Emperor’s own plan could be his undoing.