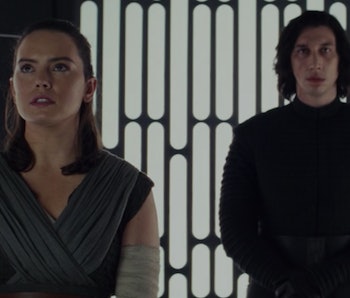 Will Rey work out her complicated feelings for bad boy Kylo Ren in Star Wars: The Rise of Skywalker? If so, will we find a way to be okay with it? The controversial almost-romance between the goth kid who used to call himself Ben Solo and the heroic Rey nearly tore the The Last Jedi apart. Now, in the sequel, star Daisy Ridley promises “[Reylo is] no joke and I think it’s dealt with really well because it’s not skimmed over.”

Last week, speaking to Entertainment Weekly, Ridley made it clear that “Reylo” — the pairing of Rey and Kylo Ren — will actually be addressed in Rise of Skywalker, noting that everything about Reylo was connected to “toxic relationships.” But how might this huge plot point actually play out?

Let’s get serious about one thing: Rey and Kylo Ren are not going to kiss. They aren’t going to hook-up and they certainly aren’t going to get married and have little Sith babies or anything. There’s no way the movie could get away with something like that and not have rioting in the movie theater. Kylo Ren is too irredeemable from a psychological standpoint. In the original trilogy, it’s easy enough for the audience to “forgive” Darth Vader along with Luke Skywalker, because Vader essentially becomes a different character after he’s unmasked. With Kylo Ren, we’ve seen his face pretty much the entire time. He doesn’t seem like he could suddenly just become a new person. In some ways, this is a testament to the writing and Adam Driver’s performance: It’s more complicated than Anakin Skywalker/Darth Vader.

Kylo Ren is almost too realistic to work within the hero/villain paradigm of the rest of Star Wars. For the most part, Star Wars is about fallen angels and epic heroes. Amid all of that, Kylo Ren comes across like an edgelord combined with Marilyn Manson on a good day. If Reylo makes you feel uncomfortable, that’s probably why. Kylo Ren is a contemporary villain inside of what is, at least tonally, a period piece.

So, how can this relationship be resolved in a way that actually makes sense? Here’s three ways.

Speculative Rise of Skywalker spoilers ahead.

Kylo Ren could die early on in the movie

Though this seems unlikely, what if Kylo Ren dies in the first act? Perhaps through some subtle betrayal of the First Order, the Knights of Ren, or maybe Palpatine, Kylo could find himself in hot water (or blue lightning) real quickly. If Kylo Ren died toward the beginning of the movie, Rey could mourn the person he was — Ben Solo — while the audience was able to move on to other stuff. It might not be the most satisfying way to go, but it would work. Plus, it would be super shocking. (Pun intended if Force lightning is involved.)

In The Force Awakens, Kylo tells Han Solo: “I’m being torn apart.” What if there was a way for Rise of Skywalker to make this more literal? What if Kylo’s good half (Ben) could be released by his death? If so, Rey could be instrumental in releasing that good spirit, which could very neatly resolve Reylo. If Rey sticks a lightsaber in Kylo Ren’s guts, we can get some satisfaction for all the bad shit he’s done. But, if at the same time his good spirit is released, and maybe hangs around for part of the movie, Rey’s positive feelings about Ben could be satisfied, too. In essence, this is kind of what happened with Luke and Vader, but here, the sacrifice of Kylo might be even more emotional since, you know, we actually know this person.

Kylo Ren will die for Rey

The most ideal way for all of this to go, if we’re being really honest, is for Kylo Ren to throw himself in front of a lightsaber or a blaster bolt for Rey. If we grant the argument that Kylo Ren loves Rey, then him dying for her is the best-case scenario. After all, in The Last Jedi Rose says the good guys will win by “saving what we love.” Reylo can’t have a happy ending, but we can feel happy about its ending if something good comes out of it. I’m not saying Kylo dying for Rey could bring balance to the Force, but it would almost certainly bring balance to the Star Wars fandom.

Star Wars: The Resolution of Reylo The Rise of Skywalker is out in theaters everywhere on December 20, 2019.