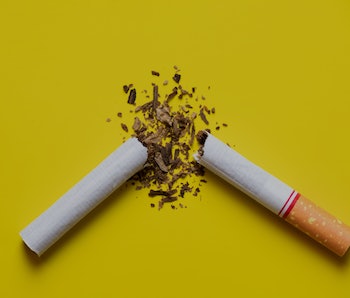 As flavored vape products face an uncertain future, the outcry from people who swear that vaping has allowed them to quit cigarettes is getting louder. There are countless stories from people who have found that vaping helps them quit. But what does the evidence say about vaping as a tool for smokers eager to stop?

Vaping has a very different status depending on what country you’re in. In the United Kingdom, vaping is a central part of Public Health England’s anti-smoking campaign. By contrast, in the United States, the Food and Drug Administration has not approved vaping as a method for smoking cessation. In 2018 the National Academy of Sciences said there was “insufficient evidence” to suggest that it was better than other methods of quitting.

There’s truth to both approaches. While there is evidence suggesting that vaping can, and has, helped people quit smoking, there’s a nuance to that story that depends on what kind of studies you’re looking at.

If you look at studies in the United Kingdom, there is evidence that vaping does help people quit.

On Thursday, Emma Beard, Ph.D., a senior research associate at University College London, and colleagues published a study in the journal Addiction to that effect. They showed that increasing use of e-cigarettes in the UK was linked to an increase in successful quitting attempts by smokers. Beard estimates that between 50,700 to 69,930 English smokers quit

Beard’s explanation rests on two major things that do support vaping’s role as a method to quit. The first is that it delivers a nicotine fix, like other nicotine replacement methods, like patches or gum. But importantly, nicotine isn’t the be-all-end-all of smoking addiction, and cigarette companies have overplayed the role of nicotine in addiction to distract from the social and psychological factors that reinforce smoking habits.

"Our research along with clinical trials and other observational studies show that they have helped a large number of smokers to stop."

To address that, Beard explains that vaping also helps mimic the behavioral aspects of smoking — in particular, the hand to mouth movement. A 2019 study published in The New England Journal of Medicine backs up that aspect of its efficacy: That trial found that vaping did help people quit smoking over the course of a year and was more effective than traditional nicotine replacement when it was combined with behavioral support.

It might be a way to quit smoking, but vaping itself is still a habit that many find very hard to shake. In part, that’s something like a JUUL pod can deliver high amounts of nicotine with a smoother hit, which is an experience that’s tempting in itself, as one perspective piece in the The New England Journal of Medicine notes.

Importantly, there are some reasons to be wary of suggesting that in all contexts vaping can help smokers quit, because there’s evidence to the contrary too.

Vaping to quit smoking in the US

" Outside of a well-controlled randomized clinical trial, the literature has been inconsistent."

“When it comes to how people are actually using e-cigarettes under real-world conditions, outside of a well-controlled randomized clinical trial, the literature has been inconsistent,” Weaver tells Inverse.

Studies like Beard’s, which Weaver says was “well-conducted,” compare the rates of smoking cessation to the prevalence of e-cigarette use. Those studies, Weaver explains, tend to find a positive relationship between quitting and e-cigarettes.

But he also notes that some other studies, which typically follow a sample of smokers over time (say a year, as his 2018 paper did) have found either no connection between e-cigarette use and quitting smoking, or have found a negative effect. Sometimes quitting was actually harder.

That aside, Weaver says that there are certain “advantageous” conditions under which vaping helps people quit:

“‘Advantageous’ means that smokers are motivated to quit, receive evidence-based behavioral counseling/support to quit in tandem with e-cigarettes, and use an e-cigarette that has a nicotine delivery profile that quells their nicotine cravings and is satisfying to use on a daily basis.”

One big difference between vaping in the US and UK

A crucial ingredient that can create an “advantageous” situation is the way that society perceives e-cigarettes.

In the UK, Beard says that they’ve managed to strike a “sensible balance” between regulation and promotion of e-cigarettes, explaining that “as marketing is tightly controlled we see very little use of e-cigarettes by non-smokers (never smokers) of any age with the majority of e-cigarette users being a smoker.”

Meanwhile, in the US, there’s clear evidence that we haven’t been able to strike that balance. In 2018, record numbers of teens took up vaping, not as a means to quit, but as a new, trendy habit. The FDA has attributed this spike to partially to the marketing practices of e-cigarette brands, namely JUUL, who have now suspended all advertising activities and on Thursday announced plans to suspend all sales of flavored pods.

Ultimately, this huge increase in teen use has pointed to a darker side of the vaping habit, which has shaped the way public health agencies think about it.

Does this cultural backdrop affect the efficacy of e-cigarettes as a smoking cessation aid? It’s unclear, but Weaver adds that it’s not something we can completely ignore when we try to apply results from the UK to the US.

“As the authors of this study [Beard’s] noted, their findings from the UK may not generalize to the US, where the e-cigarette marketplace, tobacco control policies and regulations, and the social climate, public discourse, and perceptions of e-cigarettes differ considerably from the UK,” Weaver says.

While vaping may have clear benefits for smokers, there is still some skepticism about whether or not it’s a true quitting aid in every context. For now, the US and the UK are both taking very different stances on the same body of evidence, which is growing day by day.