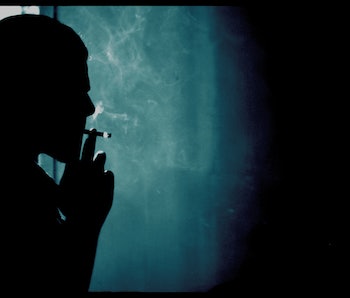 As anyone who’s tried to quit smoking cigarettes knows, smoking is not just about the nicotine. Far from being strictly chemical, addiction is also social, emotional, and psychological. It’s something to do on your walk to work, a way to take some alone time during a stressful work day, and an excuse to step outside the bar to light up and chat with your friends. Now, a study in the journal PLOS Medicine shows just how well scientists and executives at Philip Morris understood this over the years — and used their understanding to keep people hooked.

In the paper, published Tuesday by researchers from the Center for Tobacco Control Research and Education at the University of California, San Francisco, an analysis of formerly secret documents dated from the Nineties to 2006 from tobacco giant Philip Morris reveals the discrepancy between the company’s public and private stances on addiction. While Philip Morris publicly acknowledged nicotine’s addictiveness in 2000, the study’s authors suggest that the company scapegoated the chemical as the solitary driver of addiction. By placing the blame on nicotine, company scientists drew attention away from a potential public health focus on biological, social, psychological, and environmental factors that could help people quit smoking.

After decades of industry-backed science in which Big Tobacco showed that smoking was non-addictive, it was seen as a huge step for public health when Philip Morris finally admitted the truth. But the study’s authors say this move may have just opened the door for the tobacco giant to sell tobacco-free nicotine products, sold under the assumption that nicotine was the main driver of addiction. This chemical explanation for addiction, we now know, vastly undersells the other aspects of addiction.

“Despite [Philip Morris’s] apparent change-of-heart, this analysis suggests that the company’s current public framing of addiction is — at least as of 2006 — as opportunistic as its initial denial of nicotine’s addictiveness,” the authors write. “In reducing addiction treatment to exchanging ‘dirty’ nicotine (i.e., from a cigarette) with ‘clean’ (i.e., noncombustible), [Philip Morris International removes] the need for comprehensive public health interventions in favor of increasing the number of ‘choices’ available to individuals, thereby replacing the known harm of cigarettes with the unknown harms of new nicotine products.”

While the study’s authors had access to an unprecedented quantity of documents as a result of the numerous legal settlements against the tobacco industry, they acknowledge that some gaps in their understanding still exist since they couldn’t review all documents from Philip Morris. Nonetheless, the picture they paint is revealing.

For addiction researchers, public health researchers, and smokers, it’s clear that smoking is about so much more than the nicotine. But this analysis suggests that a major tobacco company attempted to steer the focus toward only nicotine, decreasing the effectiveness of interventions that could help people quit. So while we might no longer believe studies that say smoking is good for you, it seems that the tobacco industry has continued to steer thinking on addiction into the twenty-first century.