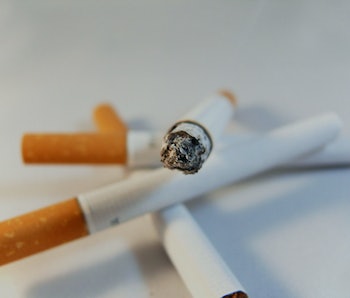 The head of the nation’s top public health organization resigned on Wednesday, abruptly leaving the agency without a leader.

Dr. Brenda Fitzgerald is stepping down from her position as the director of the U.S. Centers for Disease Control and Prevention. The move comes one day after Politico published a report detailing how Fitzgerald purchased shares in a tobacco company a month after assuming her post at the agency — where reducing American’s tobacco use is a major priority.

The report shows a clear conflict of interest between Fitzgerald’s job and her financial investments, illustrated by this anecdote from Politico:

On Aug. 9, one day after purchasing stock in global giant Japan Tobacco, she toured the CDC’s Tobacco Laboratory, which researches how the chemicals in tobacco harm human health, according to financial forms obtained from HHS’ Office of Government Ethics and calendars obtained through a Freedom of Information Act request.

In a statement to Politico on Tuesday, a Health and Human Services Department spokesman confirmed that Fitzgerald bought the tobacco industry stocks during the period in which she was divesting from other investments that could pose a conflict of interest. The spokesperson called her latest investments “potentially conflicting.”

On Wednesday, however, the tone was more stark, as HHS released a statement saying that Fitzgerald had relinquished her job, and HHS chief Alex Azar had accepted her resignation. “Dr. Fitzgerald owns certain complex financial interests that have imposed a broad recusal limiting her ability to complete all of her duties as the CDC Director,” the spokesman said.

Fitzgerald’s slow pace of divesting had already drawn the ire of lawmakers, as it had inhibited her from addressing Congress on her department for seven months since she’d taken job.

The CDC made headlines again in December for a Trump Administration ban on the inclusion of certain words in budget proposals and supporting materials moving forward. Those words included diversity, transgender, evidence-based and science-based.

More like this
Science
Jan. 22, 2023
Infection expert answers 7 top questions about Covid-19’s “Kraken” subvariant
By The Conversation and Sameer Elsayed
Science
Jan. 21, 2023
A deadly fungal plague swept the world of The Last of Us — is it realistic?
By Tara Yarlagadda
Mind and Body
Jan. 16, 2023
One daily social practice could help stave off dementia
By Elana Spivack
LEARN SOMETHING NEW EVERY DAY.
Related Tags
Share: