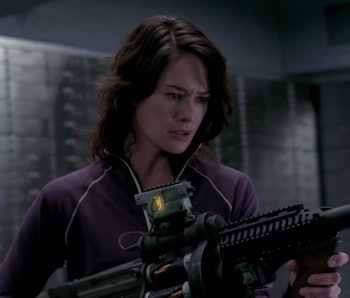 Out of all the reboots, remakes, and sequels to land in multiplexes this summer, Terminator Genisys was the one that squandered the limitless opportunities offered by its franchise. The sentient computer network known as Skynet, a fleet of killer cyborgs, and a time travel device wrapped inside an apocalyptic tale were all raw materials ripe with possibility. After Rise of the Machines and Salvation, it couldn’t get much worse, right?

Struck down by a poorly managed marketing campaign it was doomed from the start. As if knowing the main twist before walking into the theater wasn’t bad enough, early reviews slaughtered its chances of success, savagely tearing apart the shoddy plot logistics and shallow characterisation that made Terminator 3 seem inventive. It’s currently raking in the foreign dollars — and putting studio execs at ease over its dismal domestic reaction — and yet, as the opening chapter in a new trilogy, its poor performance means that future no longer looks certain.

If your experiences with Genisys were anything like mine, you’re still aching for a solid recalibration of that grim world James Cameron invented back in 1984. Where Genisys failed to reboot Skynet’s systems with ingenuity or distinction, Terminator: The Sarah Connor Chronicles triumphed.

Created by Josh Friedman for Fox and Warner Bros., the show lasted for two seasons, chalking up 31 episodes in its all-too-brief run. At times both a sequel and reboot — a goal that destroyed Genisys — it’s a captivating slice of sci-fi that makes the argument for further adventures in the Terminator universe.

Chronicles picks up in 1997, the year of the original Judgment Day avoided in T2, as a Terminator disguised as a teacher tries to take out John at school. Aware of Skynet’s continued existence and plans to eradicate John, the pair — along with new Terminator Cameron — timehop to 2007 for sanctuary. Their new bot buddy informs them that while they avoided the earlier judgment day, it was merely postponed. The apocalypse has shifted to 2011.

With three years to uncover Skynet’s shady origin — now completely unknown to even Cameron as she was unable to gain knowledge of the timehop period — the trio go to task on tracking down the A.I. that will lead to its creation. Shades of the original two films are present even in that brief summation yet the show pays homage through reverence not rip-off. The chance to continue the Connors’ story and flesh out the mythology is lovingly nurtured, by expounding the themes James Cameron set forth. What effect does time travel have on a person? How is it possible to maintain stable relationships with the weight of the world on your shoulders?

Installing Lena Headey at the helm as the relentless Sarah Connor was an inspired piece of casting that puts her Game Of Thrones’ colleague Emilia Clarke’s portrayal in Genisys to shame. Headey’s iteration of Connor bears traces of Linda Hamilton’s muscled soldier from T2 and still stands as her own creation, a fearless warrior against an unknown enemy whose mothering instincts cloud her judgment. Similarly, Thomas Dekker is perhaps the best John Connor we’ve seen thus far, Edward Furlong’s screeching tween long forgotten. His first season emo-teen wrestles with the pressures of being the future savior of mankind while dealing with the typical experiences of adolescence, transforming into a young man who could easily become the legendary leader Kyle Reese spoke proudly of in The Terminator.

Even the machines are treated to a rich inner world. If Genisys failed to convince anyone of Jason Clarke’s ridiculous nano-bot, Chronicles structures the cyborgs’ motivations much like their human counterparts. No-one is strictly good or bad, the moral opposition that makes it easy to despise them less pronounced. As John’s surrogate pal — that in itself leads to a fantastic heart-wrenching reveal in the show’s final moments — Cameron flits with her ‘nature’ as a programmed hunk of metal. Yes, she’s a machine and she knows it, and still battles with what her settings permit her to accomplish.

In contrast, Arnie’s T-800 of Genisys played up to the ‘Pops’ persona a little too gleefully.

At the expense of retaining any menace, he effectively became a cybernetic teddy bear with knowledge of quantum mechanics and a propensity for sentiment. On the outside a confidante and comrade, Cameron always remains a threat, part of the reason for the bristling energy between “her” and Sarah, whose constant doubt that the machine would try to kill her son was proved right in season 2.

Shirley Manson’s character introduced in season two advances that game further, bringing with her another sub-plot involving season one villain the T-888 Cromartie. The CEO of Zeira Corporation Catherine Weaver is a liquid metal Terminator, something that’s made clear from the offset. Her goal is not to aid Skynet, far from it. She zaps Cromartie’s tattered chassis back to life, implanting him with a beta stage A.I. known as John Henry. Shortly after his creation, he befriends Weaver’s daughter in an attempt to forward his learning experiences to better mimic real human behavior. Sounds creepy, yet those scenes were surprisingly sweet. It was Weaver’s interactions with her offspring that birthed some of the most shuddering sequences in the whole series; as the young Savannah’s real mother was murdered by this thing wearing her mom’s face.

Weaver straddled the line between evil bitch (for the aforementioned orphaning and mass human slaughter) and sort-of savior, as rumors flew thick and fast that her plan was to take out Skynet by demonstrating the existence of an emotionally-equipped cyborg. Whether or not John Henry’s trajectory was to eventually lead to the creation of the latter machines, equipped with a neural net processor, is unknown. Another frustrating story left unresolved.

In short: Chronicles is everything you wanted from Genisys. Friedman and co. knew how to best expand Cameron’s pre-existing material. Leapfrogging over Rise of the Machines and Salvation to circle back on the first two films, the continuation of Sarah and John’s story was the only one worth mining. Forget rebranding to the point of incoherence, look what that gave us; a robotized John Connor and recycled sequences from better movies.

This show plowed forward, carrying along that lonely blacktop highway Sarah Connor last spoke to us from, exploring where that mother and son would venture after the destruction of Cyberdyne. To an invigorated place where robots and humans each ponder their own sovereignty. And begin to wonder if there might be a way to co-exist, after all.

Catch all of Terminator: The Sarah Connor Chronicles for free on The CW Seed. Now. Go on.

More like this
Gaming
6.22.2022 8:36 PM
Everything you need to know about Warzone’s Season 4 Terminator crossover
By Joseph Yaden
Innovation
6.19.2022 6:04 PM
47 popular home upgrades people are making that are under $35 on Amazon
By Christina X. Wood
Entertainment
20 hours ago
Marvel finally comments on the wildest Thanos theory from Avengers: Endgame
By Corey Plante
Related Tags
Share: