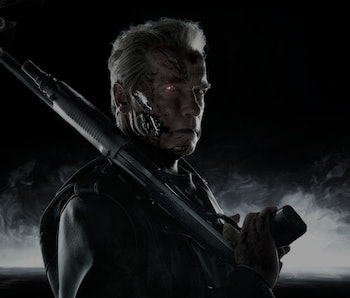 This past week, director Robert Zemeckis made movie fans pay attention when he said he’d never, ever remake Back to the Future. Amblin Entertainment can’t trot out anything stamped with the BttF tag because Zemeckis and his co-writer Bob Gale insisted on maintaining the rights to the franchise some thirty years ago. Nothing happens without their approval.

Another filmmaker who dabbled with time travel in the early ‘80s was less fortunate when hammering out his terms. To ensure he maintained artistic control throughout production, James Cameron sold the rights to The Terminator… for a dollar. Giving up his seat at the rights table didn’t shoo him from the franchise, however, as he returned to direct the equally-impressive Terminator 2, but he would no longer have a say in future instalments. Two sequels riffed on the world of his creation since then and now 2015 brings us another. Where Cameron’s entries stand in the cinema canon like champion pedigrees, Genisys shuffles along like a neutered mutt who once knew glory. Here’s why.

The best has already come and gone

To prop itself up as more than ‘just a sequel’ Genisys is a self-described “reset.” The plot lifts inspiration from Cameron’s first movie, and where that narrative travels one way, this newly refashioned one veers off into an alternate timeline.

There’s the film’s biggest flaw — it’s most captivating when aping moments we’ve already seen. Kyle Reese lands in 1984 to discover the timid waitress he’s assigned to protect is a toughened warrior aware of his arrival. The T-800 sent back through time by Skynet to kill Sarah Connor is greeted by an older Terminator waiting to blow his cyborgian ass to hell. It’s fun to hear Connor bellow the line “Come with me if you want to live!” The painstakingly-recreated T-800 from T1 engaged in battle with a grizzled version of himself, is also a clever idea. These are undoubtedly neat twists and it’s they that provoke the most interest: as copies of moments previously executed in superior movies.

Screenwriters Laeta Kalogridis and Patrick Lussier have crafted films worth your time - but Genisys isn’t one of them. The script’s heavy references to the first two movies only highlight its shortcomings. As soon as the film strays from the established mythology it descends into the dirge of modern blockbusterism: tracing the same, tired plot from a predecessor. Heroes unite to take down the big, bad Skynet. Again. It lacks a strong, unifying voice. There’s no deeper, cutting insight into the central conceit of the franchise, just a lot of opportunities for fans to thump their arm rests and fist pump in acknowledgement. Here, nostalgia becomes the only emotional investment.

Action without the terror

The Terminator and T2 are pioneers in the action field. That’s only so because Cameron knows what else is required for grandiose setpieces to succeed: a real threat. His original vision for the Terminator rose from a desire to craft a clever slasher film — and that horror is evident in the terrifying future dominated and driven by the vitriol of a sentient computer network. Hordes of always-smiling Terminators parade across a ruinous wasteland. Skulls are crushed beneath metallic talons. But Genisys offers no such motivation.

The low-budget effects of T1 never detracted from the unrelenting fear inspired by the T-800, and the big-budget CGI efforts of its sequel allowed the T-1000 to take over that mission. The crumbled husk of civilisation inhabited by Michael Biehn’s original Kyle Reese, showed all human survivors living in fear of Skynet’s parade of hyperalloy killers. That bleak dystopia is replaced by a PG-13 landscape that resembles a video game trailer. Hey - shooting at robots is fun! Fast cuts try to mask the CGI overuse but do the exact opposite. Instead of that sinister army, we get a fleet of very, very shiny T-800s. While we’re at it, who the hell’s polishing these endoskeletons?

For that matter, there’s no real sense of malice from John Connor’s T-3000 either. His very existence should come loaded with evil - because this is the savior of mankind, dipped in the black goo from Prometheus and recalibrated into a nano-tech Terminator. But somewhere along the way Skynet’s latest invention was stripped of its violent ambition. Robert Patrick’s T-1000 skewered heads to walls, gouged out eyes, yanked out guts. The T-3000 isn’t hungry for the win. His sole concern is standing too close to a magnet. Which is likely the only reason Sarah and Kyle are taken to hospital and not the police station, so we can see some snazzy CGI money thrown at actor Jason Clarke doing a weird, Moonwalk-inspired move near an MRI machine. Scary.

Originally, Arnold Schwarzenegger auditioned for the role of Kyle Reese in The Terminator, but James Cameron realised his bulky stature and limited acting skills were better suited to a cyborg. It’s a shame that the casting directors on Genisys didn’t reach that same conclusion with Jai Courtney, who spends much of the film doing the “cyborg who can barely pass for human” routine. It’s a surprise when his reveal - another Terminator! - never comes.

Where Biehn conveys the bruised, weary warrior through the actions of a man raised in the aftermath of a nuclear war, Courtney struggles to deliver one throwaway line with conviction. His bland, unimpassioned portrayal makes it seem as if Reese grew up in suburban California playing video games and learning how to smart-mouth women from watching Bruce Willis actioners. Gone is the relentless protector, corded with sinew and muscle, who’s instead replaced by a lesser copy. It’s impossible to imagine how Sarah Connor, THIS Sarah Connor who is supposedly a similar version as the one from T2, falls for him.

And on that note, it’s strange to see Emilia Clarke lose the edge she gives her Game of Thrones counterpart, Daenerys Tarygaryen.

In the same manner that Courtney is a watered-down Reese, Clarke fails to shake the ‘waitress’ element of Sarah which doesn’t make sense considering she’s had her entire life to prepare for the war. Linda Hamilton’s transformation from meek teen to muscled heroine takes place across a handful of years, most of which are spent locked up. Clarke’s Connor has access to a Terminator and a lifetime of freedom - perhaps these factors relieved the pressure on her to combat Skynet, allowing her to relax instead of focus her efforts. Whatever the case, Clarke struggles to portray the strong, ferocious mother of John Connor, who doesn’t cry when Terminators die or when her son makes sappy Elton John references.

The beginning of the film finds Kyle Reese in some alternate 1984, where a combat-ready Sarah Connor and her aged Terminator have awaited his arrival for “over a decade.” The reason given stems from her rebooted backstory. She was never a timid waitress. She was raised with an understanding of Judgment Day, Skynet and Reese’s mission to protect her. All of this knowledge was passed to her (presumably) by a T-800 which rescued her back in 1973 after a T-1000 murdered her parents. That T-800 machine is referred to in the film as Pops.

And there’s no explanation for his appearance back in 1973.

There are no nods given to who or what might have sent him back, except for a convenient line that Pops’ files on the matter were erased. Also, there’s no discussion or insight given as to when Skynet sent a T-1000 back to 1973. It’s a narrative thread that warrants a full investigation, especially when the fragility of time travel is a recurring theme. It sits uncomfortably in a movie crammed full of self-aware expositional dialogue — why does no-one think to further explore this small yet important inciting event? Probably because they want to make sure you’ll be back for the sequel.

Another victim of the film’s rating is its intended audience, which is everyone. A PG-13 blockbuster won’t drip with blood, or the realistic small-scale effect of a nuclear war, because its chief concern is entertaining moviegoers who weren’t alive when the original movies were released.

The main criticism aimed at the third instalment Rise of the Machines centred on its attempt to elbow in humor for a cheap laugh. Genisys throws an even wider net to appeal to its youthful demographic. Inner Circle’s Bad Boys soundtracks a moment where the lead trio are fingerprinted and photographed by police, a scene completely out of place in a film about killer cyborgs. Awful one-liners transform Reese from a dry, almost-humorless soldier into just another cookie-cutter action character. His method for enticing Sarah Connor is with his juvenile sense of humor rather than his ability to protect her. But that matters not, as Sarah fluctuates between being a capable soldier to the helpless damsel, to fulfil the entire breadth of the feminine spectrum throughout the movie. ‘Cause it’s not a family-friendly blockbuster without a woman who requires male heroics.

Making the T-800 even more cuddly gives the middle finger to the character’s steely origins. Yes, he’s reprogrammed in T2. But he doesn’t lose his central functioning tenet: it’s a killing machine who will do just that. Arnie fulfils the ‘protective father’ role - giving the only good performance in the film - and trades barbs with Reese of the ‘you’d better take care of my daughter’ variety. Because kids don’t want to see him tear the still-bearing hearts from punks or fill store clerks full of lead. That’s the problem, because adults will gladly hand over their cash to see his Terminator embrace his true nature.

Hidden in amongst all of the problems is a part of Genisys’ failure that fills me with a sense of hope. Because if a moviegoer, a person without creative involvement, can understand the value of an original idea, maybe studios can too.