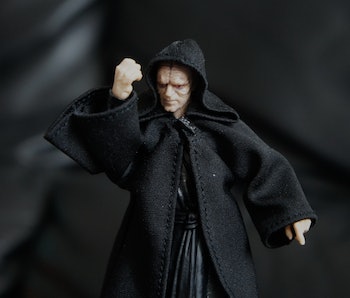 In Star Wars: Episode III — Revenge of the Sith, Palpatine tells a super desperate Anakin Skywalker that “to cheat death is a power only one has achieved, but if we work together, I know we can discover the secret!” Now that Palps is back for The Rise of Skywalker, it would seem he discovered that secret without Anakin’s help at all. Or did he? Are we totally sure that Palpatine is actually back from the dead in The Rise of Skywalker? After all, this is Star Wars, and there are a lot of ways to be part of the story and still be totally dead.

With that in mind, here are five ways Palpatine could still be dead in The Rise of Skywalker but also very much in the movie.

Speculative spoilers for The Rise of Skywalker ahead.

5. Palpatine only exists in flashbacks

Though this seems epically lame, it is possible Palpatine isn’t in the movie in real-time at all. Perhaps everything we see in the film (Dark Rey, the Sith Fleet, et al.) could have simply been set into motion by Palpatine a long time ago. That would mean, if he appears in the film at all, it’s only in a flashback. As for that voice-over in the D23 trailer where he says “your journey nears its end,” we really can’t trust that that exact line of dialogue is in the final movie. It wouldn’t be the first example of a Star Wars movie trailer to feature a voice-over that didn’t make it into the final cut. (Famously, Luke Skywalker spoke in a trailer for The Force Awakens but did not speak in the film.)

So we can’t put too much stock in the trailers right now. All we know is that J.J. Abrams has said Palps is in the movie. So, that could be flashbacks.

4. Palpatine is a hologram or a series of holograms

If Palpatine crashes The Rise of Skywalker as a series of creepy-ass holograms, it would dovetail neatly with existing Star Wars video game canon. Back in 2017, Battlefront II set up the idea that the Emperor left behind a bunch of sentient holograms capable of bossing around what was left of the Empire after Return of the Jedi. Though not as rock and roll as a full-on resurrection, this explanation for Palpatine’s comeback might be the cleanest, given that it’s been staring us in the face for two solid years.

In the old Timothy Zahn books, specifically Heir to the Empire, the idea of cloning an old Dark Jedi is floated in a really interesting way. In those books, Joruus C’baoth is a clone of the original Jedi named Jorus C’baoth. (Mind that extra “u”!) The idea here is that cloning a Force user made that clone straight-up crazy. Joruus C’baoth isn’t remotely sane, and the clone of Luke in The Last Command, Luuke Skywalker, is even nuttier. So, the idea here is that Palps actually dies in Return of the Jedi and somebody — perhaps a Knight of Ren? — made a crappy clone of him. This cut-rate clone is even more off-the-wall-batshit-insane than the OG Palpatine. This would be a low-key and accidental homage to the Michael Keaton film Multiplicity, but I think you get the idea.

2. Palps only exists in Rey and Kylo Ren’s mind as a representation of the Dark side

It’s possible The Rise of Skywalker could borrow an idea from George Lucas’ original conception of the sequel trilogy, with some of the action taking place on another plane of existence. In other words, some of The Rise of Skywalker could happen inside the Force. If that was true, Palpatine might not really be Palpatine, but rather, a kind of embodiment of the Dark side. In The Clone Wars episode “Sacrifice,” Yoda encounters a sort of vision of the ancient Sith Lord Darth Bane in a metaphysical realm. Darth Bane was not dead, nor was he really a ghost in the traditional sense. Instead, this was the Dark side taking the form of Darth Bane. Something similar could happen with Palpatine in The Rise of Skywalker.

Perhaps the best-case scenario for Palpatine’s comeback is that he’s just a freaking ghost. We know the Jedi figured out how to become spirits after Qui-Gon and Yoda cracked the ghost code, but that doesn’t mean there aren’t Sith ghosts, too. In both canon and non-canon settings, Dark side ghosts have been a thing, and some production art even suggested that both Luke and Kylo Ren would have been visited by Sith ghosts at various points in both The Force Awakens and The Last Jedi. Plus, there is some debate about how many ghosts Anakin Skywalker has: Is there an Anakin ghost and a Darth Vader ghost? Or just one ghost?

In any case, there’s certainly enough canon and quasi-canon here to mess around with. If Palpatine is an evil spirit guiding Kylo Ren (or Rey), it’s arguably scarier than if he’s back in a new gross body. A Sith Lord you can’t kill is one thing, but a Sith Lord you can kill and it doesn’t matter? That’s even more hardcore.