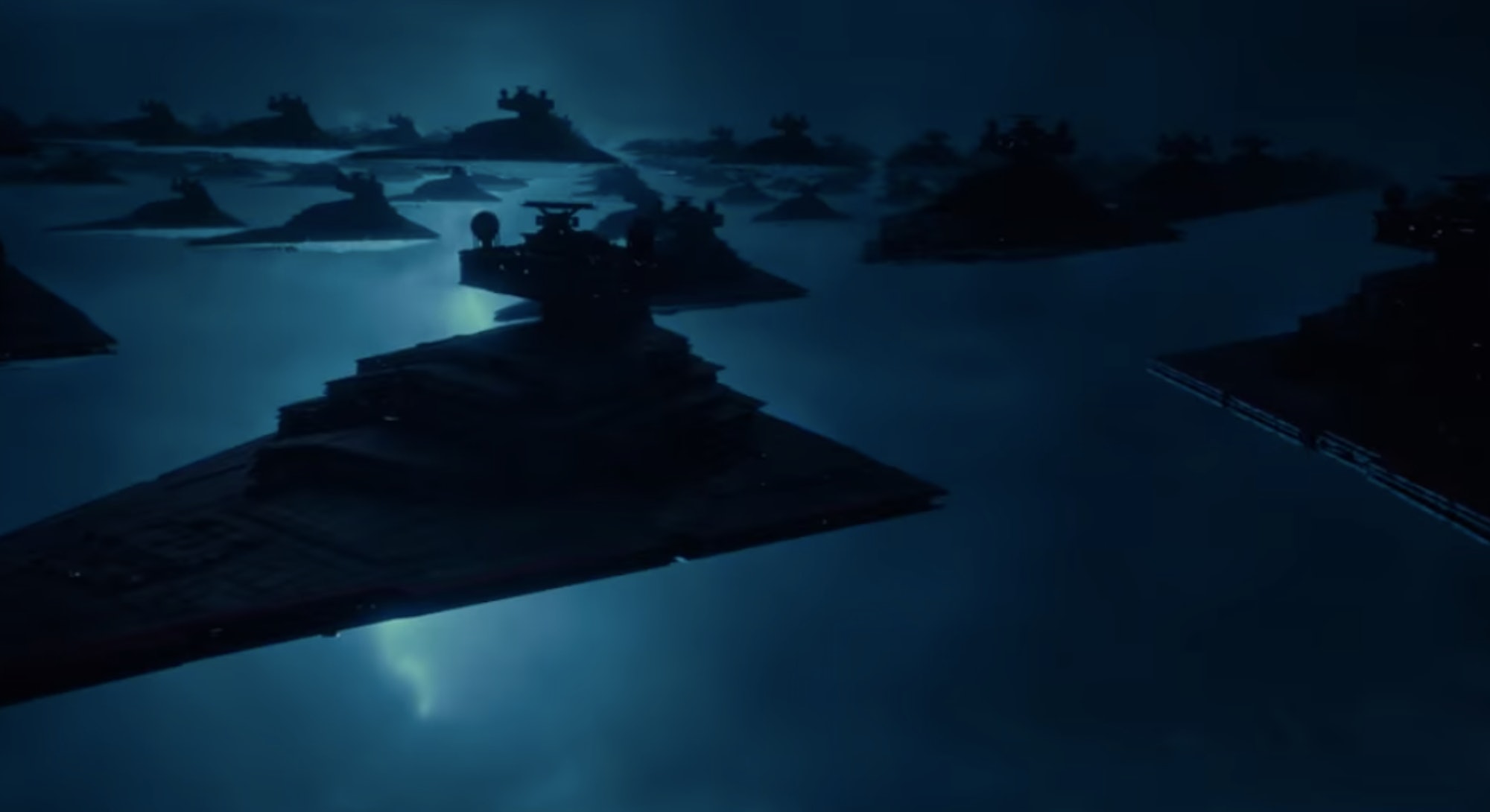 If nostalgia for the creepy voice of Emperor Palpatine or a deep longing for double-bladed red lightsabers wasn’t quite enough to get you excited in the latest trailer for The Rise of Skywalker, then maybe some vintage starship action will do the trick. Hiding in plain sight, the new D23 Episode IX footage brought back four different kinds of old school Star Wars spacecraft; Y-Wings, B-Wings, a Corellian Corvette, and what appears to be an entire classic trilogy-era Imperial Star Destroyers.

While the return of the ragtag Rebellion ships can easily be explained, the retro-invasion of Star Destroyers and their old-school cool seems to be a bigger deal. Did this ominous space ship reveal actually confirm a rumor about a secret Sith Fleet?

Speculative spoilers ahead. You’ve been warned.

Here’s the basic difference in terms of how these suckers look on-screen:

For easy contrast, here’s what one of those Imperial-Class Star Destroyers looks like from behind:

Obviously, we’ve seen a fair amount of these ships in recent Star Wars movies, specifically in Rogue One and Solo; which makes perfect sense. Those two films are set during the height of the reign of the Empire and near the events of the classic trilogy, meaning, the contemporary Star Destroyer of that time period would be the familiar Imperial-class.

Because the sequel trilogy takes place three decades after Return of the Jedi, and the defeat of the Empire, we haven’t seen Imperial-class Star Destroyers in either The Force Awakens or The Last Jedi for the simple reason that the First Order seemingly wouldn’t ever use a ship that old.

However, there is one notable exception.

Famously, the scene which introduces Rey shows her scavenging the insides of a crashed Imperial-class Star Destroyer on the surface of the planet Jakku.

This image was arresting and affecting because it casually showed one of the deadliest battleships from the old Star Wars trilogy as a giant piece of decaying junk on a backwater planet:

But now, two films later, we’re seeing not just one Imperial-class Star Destroyer back in space, but an immense fleet.

In the new trailer, we’re made to think Finn (John Boyega) and Jannah (Naomi Ackie) are maybe reacting to the sight of this huge fleet, and the fact that these are old-school ships seems to be indicative of something big, which is where the Sith fleet rumor comes in.

Earlier this month, an alleged leak from Rise of Skywalker seemed to indicate that Kylo Ren would need the help of a long-lost fleet of ships called “the Sith Fleet.”

According to an anonymous source at Making Star Wars, these ships are thought to have been wandering around in “unknown regions” or space.

Here’s what that report said outright in early August:

“The Sith Stormtroopers have been hidden away in the unknown regions. It is apparently hellish in those areas. The universe is “not entirely stable.” The area is dangerous and full of peril. Since Emperor Palpatine’s death, the fleet has been dodging gravity wells and surviving in the wilderness of space in the unknown regions waiting to be found and to finish their mission.”

And now, in the new D23 footage, literally everything we see around the new fleet of retro Imperial-class Star Destroyers supports this description.

There’s crazy space lighting happening around the ships, there are no stars visible around them, and, most importantly, they are ships of a specific design that are no longer in service in the First Order:

The real question is, if Kylo Ren is really looking for this fleet, what have they been doing and what was their original mission?

On some level, it makes sense that this secret fleet of Star Destroyers is just a hold-over from Emperor Palpatine’s reign and that all the people on them are still loyal to him. But, then, you’d have to do the math.

How can a fleet of Star Destroyers — each with a crew of about 30,000 people — just have been chilling out for 30 years? There are at least 90 ships in this one shot in the trailer, so it seems unlikely that 2.7 million Imperial officers and troops have just been doing nothing for 30 years. I mean, if this secret fleet is legitimately old, that it’s either full of empty ships or the ships are crewed by droids or perhaps, clones.

In the Legends book, Dark Force Rising, Grand Admiral Thrawn commandeered a lost fleet of empty ships called the Katana Fleet, all of which were essentially flown by remote control. Could Rise of Skywalker be borrowing that idea?

In any case, this fleet of old-timey Star Destroyers might be the most interesting thing about the new trailer, if only because it suggests a huge game-changer in the form of an invasion from another era.

In a sense, it’s like J.J. Abrams has pulled in the Imperial fleet of the past to attack the Resistance of the future. Now, I’m not talking about actual time travel here, but the visual equivalent thereof.

After all, one of the first spaceships anyone ever saw, in the very first Star Wars movie ever was this type of Star Destroyer.

The return of that exact ship feels very pointed indeed.