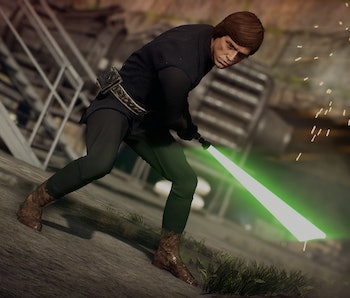 What did heroes like Luke, Han, Leia, and Lando do with themselves after Endor? With Star Wars: Battlefront II, we finally have some canonical answers.

Ten years ago, Star Wars canon was a lot bigger than it is now. But, ever since Disney took over the franchise, all the old books, comics, and games became an alternate history. The upside of this is that pretty much every new Star Wars thing after The Force Awakens counts. And that the new game, Battlefront II. Although the game technically covers that 30-year gap, most of the action takes place during the 13 months immediately afterReturn of the Jedi. And even we mostly follow Imperial Commander Iden Versio, the game also checks in with most of the major players from the original trilogy.

8. The Emperor Planned “Operation: Cinder” After His Death

After the Emperor died in Return of the Jedi, the remaining members of the Empire still did his bidding, because Palpatine left a series of hologram recordings to be distributed via some creepy red droids. We see only one very early on in the game when Iden Versio meets with her father, Admiral Garrick Versio right after the destruction of the second Death Star.

These droids deliver information and instructions regarding Operation: Cinder, which had the ultimate aim of destroying both the Empire and its enemies — or at the very least just destabilizing the Republic.

7. Luke Skywalker Retrieved a Compass on Pillio That Probably Led Him to the First Jedi Temple

Early in Battlefront II, Iden Versio’s comrade Agent Del Meeko is on a mission to destroy the Emperor’s Observatory on Pillio when he encounters Luke Skywalker, who had been drawn there by the Force. The two save each other’s lives and become allies, almost friends. The “Observatory” turns out to be some kind of vault full of relics, and Luke somewhat innocently takes something he calls a “compass.” But it looks like it might contain star coordinates.

We can’t know for sure, but the implication is that Luke’s retrieval of this artifact probably led him to the First Jedi Temple and eventually to his self-imposed exile on Ahch-To.

6. Han Solo Grew a Beard, Liberated Kashyyyk With Chewbacca, and Had a Son

One Battlefront II mission has the player assume control over Han Solo on Takodana at Maz Kanata’s castle. Han is meeting up with an Imperial statistician that has information that can help him and Chewbacca liberate Kashyyyk, Chewie’s homeworld, from Imperial control. They go on to do just that in the canonical novel Aftermath: Life Debt immediately after.

In Battlefront II, Han and Maz already have some kind of personal history, but their interaction in Battlefront II informs their relationship as we see it in The Force Awakens.

It’s also worth nothing that these events happen barely a year before Ben Solo is born, which means that a lot happens over several months.

5. Iden Versio Helped Win the Battle of Jakku, Which Finished Off the Empire For Good

The Empire might have lost its Force-wielding leaders during the Battle of Endor, but it went on to survive for more than a year afterward. It wasn’t until the Battle of Jakku that the Empire was truly defeated, and as Iden Versio, you help win that battle for the Rebels in Battlefront II.

Remember at the beginning of The Force Awakens when Rey scavenges through the remains of an old Star Destroyer? That ship was brought down during the Battle of Jakku, along with many others.

Because Iden Versio and Del Meeko begin a romantic relationship at this point on Jakku, and the epilogue reveals that they go on to marry and have a daughter, some people wonder if that daughter might be Rey.

Note: Han and Leia aren’t involved in the battle, probably because Ben Solo was born a short time after, meaning that Leia was probably nearing the end of her pregnancy at the time.

After the Battle of Jakku, the remnants of the Empire fled to the Unknown Regions of the galaxy and regrouped to form the First Order years later. As it turns out, the former member of Inferno Squad Gideon Hask was among those officers, and he was presumably also one of the founding members.

As such, we see during the Battlefront II epilogue that he’s an officer in the First Order just before the events of The Force Awakens in charge of something called “Project: Resurrection.” He’ll no doubt play an important role in upcoming DLC for the game and maybe even future film installments.

The final mission of Battlefront II sees Del Meeko 30 years after the Battle of Jakku captured by the First Order on Pillio. Kylo Ren shows up and wants to know how he can find “the map to Skywalker.” He demands, “Show me where the old man took it.” He’s talking about Lor San Tekka, which leads directly into The Force Awakens when the First Order finds him at the start of the movie.

We don’t know much about how Iden Versio and Del Meeko might’ve been involved with Luke Skywalker and Lor San Tekka, but if they had more information about the missing last Jedi than Han or Leia, then their relationship might wind up being very important. Keep in mind that Del Meeko and Luke had their bonding session all those years ago on Pillio.

When Kylo Ren reaches out with the Force to interrogate Del Meeko, it’s the same as when he does the same to Poe Dameron and later Rey, but here the experience is vastly different. Kylo Ren literally goes into Del Meeko’s mind through dreamlike memories in which the player has to battle apparitions in previous areas from the game.

Does this mean that when Kylo Ren invaded Poe’s mind, he had to battle his way through the ace pilot’s memories? Metaphorically, yes. Whether or not we take all this literally as opposed to a forced gameplay mechanic, the Battlefront II sequence further contextualizes how Kylo Ren’s unique power works.

1. Snoke’s “Project Resurrection” Teased for Future DLC and Maybe Even The Last Jedi

Kylo Ren’s interrogation of Del Meeko might be a fun lead-in to The Force Awakens, but the more eyebrow-raising thing we learn in the Battlefront II epilogue has everything to do with Gideon Hask, Protectorate Gleb, and something they call “Project Resurrection.” Del Meeko apparently discovered the project, which is why he was killed.

When Gleb asks if “project resurrection can continue as planned,” Hask says “on the contrary” and chastises Gleb for her incompetence. Flustered, she promises to “relocate the Pillio operation” and triple their efforts on Athulla.

We can’t know what this project entails, but it’s entirely possible that it has something to do with Snoke and the true purpose of the First Order.

Battlefront II gets a Resurrection DLC on December 13 just before The Last Jedi is released in theaters on December 15.