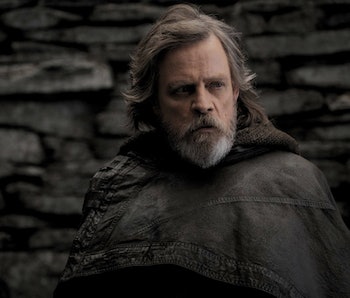 Fans who’ve long been wondering how Luke Skywalker wound up on Ahch-To for so long might finally have gotten a slight answer in the Star Wars: Battlefront II video game.

Though Battlefront II offers hectic warfare set in the Star Wars universe with crazy mashups where Rey might fight Darth Maul, the game also includes a canon story campaign bridging the 30-year gap between Return of the Jedi and The Force Awakens.

The focus is on Iden Versio, an Imperial commander and leader of Inferno Squad. She’s tasked with executing Operation Cinder, the Emperor’s contingency plan following his death during the Battle of Endor. The campaign offers some insight into the lives of Imperial soldiers along with its fair share of cameos from the films’ heroes.

The earliest and perhaps most significant of these cameos sees Luke Skywalker acquire an item that just might explain how he came to find the First Jedi Temple.

After several opening missions in Battlefront II that happen around and during the Battle of Endor with Iden Versio and her squad, the player surprisingly assumes the role of Luke Skywalker in the fourth mission.

Luke is drawn by the Force to the planet Pillio in the Mantle Defense System for reasons he doesn’t even understand. R2-D2 is along for the ride, and the two notice nearby activity from Imperial troops. The droid waits behind while Luke explores the area, fending off stormtroopers while he goes deeper into a nearby cavern.

But most of Meeko’s team winds up dead, and without Luke’s help, he would too. You’d never imagine Luke would team up with an elite black ops Imperial soldier, but Battlefront II does a decent job at manufacturing a circumstance where it makes sense.

The mission itself is short and repetitive as you wail away on some spidery “scritters” with Luke’s green lightsaber and a few Force abilities, but the “Observatory” they explore is a vault full of ancient, presumably Force-sensitive artifacts. Meeko’s orders are to blow it all to hell, but the zen Luke somewhat innocently grabs a single object from one of the many cases.

Who’s Meeko to protest if this Jedi wants to slightly jeopardize his mission? It’s not like he could stop Luke even if he wanted to. So the Jedi walks away with a precious item the Emperor didn’t want him to have.

We can’t be 100 percent certain, but it’s likely that this “compass” doesn’t point North. Chances are high that it’s a missing link in the chain of events that leads Luke to the First Jedi Temple.

The compass likely has some kind of Star Map inside of it considering the constellation engravings. It likely leads Luke directly to Ahch-To, or at the very least serves as the first item on a series of quests taht will lead him there.

It stands to reason that such an ancient location lost to time would require an equally as ancient artifact. It makes sense why the Emperor would deem such an item “dangerous” consider Luke would go on to rebuild the Jedi Order. Sure, things didn’t turn out that great, but the Emperor can’t know that.

Could that compass relate in some way to the paper map we see featured in The Last Jedi trailers? Maybe.

Battlefront II doesn’t offer much else in regards to Luke’s journey leading up to The Force Awakens, so it looks like we’ll have to wait for The Last Jedi to close that narrative loop.

Star Wars: Battlefront II will be released November 17, and The Last Jedi hits theaters on December 15.