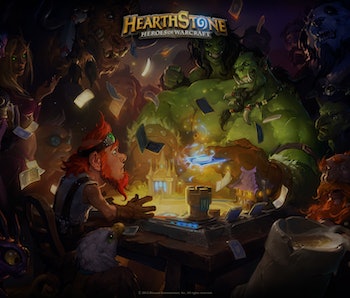 Wednesday could be a new day for Apple, if the speculation is true and the tech giant aims to become the world’s premiere mobile gaming platform. With a beefy market penetration already at its advantage, it’s about time Apple attempts to make “gaming” an associated hobby with their products.

Blizzard’s Hearthstone: Heroes of Warcraft could be Apple’s champion.

While not exclusive to the iOS (really, what game is?), the online card battling game looks super nerdy — but its massive audience and revenue stream are totally jacked. At 30 million players, far more players than big brother World of Warcraft ever boasted, Blizzard rakes in $20 million a month from Hearthstone and surpassed Dota 2 in revenue earlier this year.

It helps that Hearthstone, like most popular modern online games, is FTP (free-to-play), drawing profits from selling booster packs and cards. Akin to Magic the Gathering and Pokemon, Hearthstone takes characters from the Warcraft mythos into a surprisingly accessible card game that pits players around the world against each other in ranked matches. You can learn the game in 10 minutes. I know, because I did this Labor Day weekend and got hooked.

But objectively, Hearthstone is the edge Apple needs to succeed in its niche. The Verge touts Minecraft as the key to Apple’s gaming success, and though it’s a smart choice it’s not a very compelling one. Minecraft isn’t strong enough to give Apple a unique identity. It’s been around for years on PC, PlayStation, Xbox, and will soon be on HoloLens.

It’s also not an exciting prospect on mobile; it’s better suited for desktop or console play. Apple could be making moves with the Apple TV as their console, but they’ll be dwarfed by Xbox and PlayStation, which in turn are wrestling with the ever-elite PC market. Apple’s strongest muscle is in mobile — the iPhone a console sold 47.3 million units in third-quarter 2015 alone.

Both Minecraft on iOS and Hearthstone have roughly 30 million players, but with the rapidly growing eSports base welcoming Hearthstone, interest in the latter can only go up.

More like this
Gear
Jan. 19, 2023
Why Apple's rumored smart display could be doomed from the start
By James Pero
Innovation
Jan. 28, 2023
The 5 best mini projectors for iPhones
By Debbie Lee
Innovation
Jan. 19, 2023
A robot choreographer reveals why M3GAN — and all robots — should dance
By Molly Glick
LEARN SOMETHING NEW EVERY DAY.
Related Tags
Share: