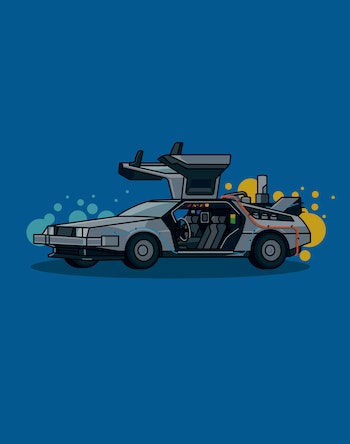 It’s October, which means you might have already seen the first houses on your block wrapped in spooky decorations. It may still feel like summer, but we can all learn something from those who cover their front lawns in fake spiderwebs on October 1, while the rest of us cling to summer like a warm watermelon beer.

A new season is about change, and the great thing about those Halloween die-hards is that they’re here for it. Their motivation is inspiring, especially since change can be frightening. It’s hard to decide to put away the beach towels and put a skeleton on the front lawn.

It’s even harder to decide when to act to change your life or career.

There’s no guidebook telling you when it’s time to start a new chapter and as Art Markman, Ph.D., a psychologist and the author of Bring Your Brain to Work, tells Inverse it’s really easy to get in your own way.

Like seasonal change, Markman adds that “often, the changes at a job happen slowly, so there aren’t significant events that give people the energy to make a significant change.”

Figuring out how to take stock of your current job, and recognize inherent biases is the first step to uncovering whether or not you need a career change. And there are ways to get that process moving.

This is an adapted version of the Strategy newsletter, a weekly dispatch with insights and recommendations for your life, career, and finances. Sign up for free here.

Break out your DeLorean, TARDIS, or consult your copy of Unfogging the Future, because to do this, it’s going to require a trip to the future.

Why most people get stuck in their jobs

The good news is that there’s some evidence that a lot of Americans are happy with their jobs. About 85 percent reported being either somewhat or very satisfied with the jobs in a CNBC poll in April. But for the 15 percent who aren’t happy, there are a few good reasons why things can get that way.

To start with, a major change — like leaving your old job — is rife with uncertainty. Uncertainty is inherently stressful for humans. In some cases, it’s even more stressful than an actual bad experience.

In one incredibly metal experiment published in the journal Nature Communications, people had to guess whether a virtual snake was hiding under a number of virtual rocks. If they guessed wrong, they got a shock. Strangely, this team found that people were actually more stressed when they were unsure of their choices, not when they knew that they were right or wrong. In other words, uncertainty was worse for people than inevitable pain.

The interesting thing about that study is that one of the authors, Robb Rutledge, Ph.D., a neuroscientist at University College London, drew a direct connection to what searching for a job feels like.

“When applying for a job, you’ll probably feel more relaxed if you think it’s a long shot, or if you’re confident that it’s in the bag,” he said in 2016. “The most stressful scenario is when you really don’t know. It’s the uncertainty that makes us anxious.”

Markman, too, echoes this idea. We often prefer the “devil known to the devil that’s unknown,” which can keep people trapped in unpleasant situations.

"The most stressful scenario is when you really don’t know. It’s the uncertainty that makes us anxious."

But Markman also says that life-altering events change people’s perspectives on this uncertainty problem. In Bring Your Brain to Work, and in an August essay he wrote for Fast Company, Markman says that tragedies or life-altering events change our perspectives about the severity of the unknown. The “uncertainty of making a career switch seems significant when compared to another day or week at an unpleasant job,” he writes.

With that in mind, Markman has a simple tool for how to avoid the trap of being in an untenable situation. Do not wait for a life-altering event, but engage in a little bit of mental time travel instead.

Use your future self to make your current self happy

Markman outlines two basic ways to make sure that you’re constantly taking the temperature of your work environment. The best thing to do is to be methodical and organized about it. The same way your company may do a quarterly check-in, you should do at least a yearly check-in with yourself when you ask yourself one question:

Does my job still align with my goals? And, speaking of that, what actually are my goals, for my career?

If the answer is no, then you have a good thermometer reading to work with. But even then, it might not be clear. So Markman suggests that you perform what he calls “mental time travel.”

"It can be helpful to imagine yourself at the end of your career."

There’s a lot of interesting work suggesting that when you look at things from the perspective of your older, future self you tend to be more proactive about making prudent decisions.

One of the classic experiments regarding this actually has to do with saving for retirement. In a famous 2011 study, a team of scientists had people perform a virtual reality experiment. One group of people got to see an aged version of themselves, while the others just saw their current visage, and then they had to decide how to invest an imaginary $1,000. After looking at their older selves in the face, participants put away an average of $172 towards a retirement account — more than double the amount that people who only saw their young faces allocated.

The “future self” exercise has also been shown to help people do prudent things in other domains. People who wrote letters to their future self who demonstrated “continuity” were more likely to exercise, for instance.

Basically, if you feel connected to your future self, you’ll do right by your current self. It’s the same thing for career choices, says Markman. He suggests that you take a second to imagine how your future self would look back on your career. This tends to help distill the things about your job that are actually important versus the things that won’t matter years from now.

“It can be helpful to imagine yourself at the end of your career and to think about all the things you would regret that you did not accomplish,” he says. “Then, make changes in your work to ensure that you are more likely to make that lifetime contribution.”

This is both advice from a scientist who specializes in careers and, strangely, the actual plot of a 1999 Frasier episode, for those looking for a way to approach this. In Season 7, Episode 8, “The Late Dr. Crane,” Frasier reads his own obituary and is displeased enough with the results to prompt some serious life changes. If you’re interested, you can watch the whole thing here.

You don’t have to go as far as writing your own obit. Take a look at your future self on FaceApp’s old age filter. (If you’re worried about privacy concerns, most of the hype was largely overblown.) Ask that older version of yourself how they would feel about your current career.

Regardless of your method, thinking about your future self does help clear away the psychological clutter of the day-to-day. When it comes to deciding whether you want to embrace a change, like a career shift, your future self has perspective your current self can’t have.

Let them give you the perspective to move forward or the affirmation to stay securely put.