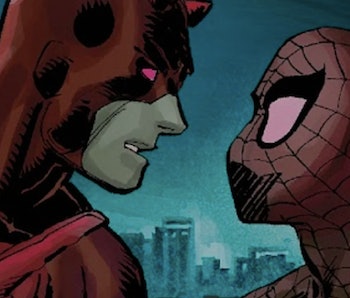 When Daredevil first premiered on Netflix, it was supposed to be a grittier, street-level view of the same Marvel Cinematic Universe where Iron Man, Captain America, and Thor regularly team up to save the world. But Daredevil and the rest of the Defenders never showed up in the MCU, and by the time the Netflix/Marvel universe came to an end, it seemed to exist in a totally distinct world from the one where the Avengers faced down Thanos — or did it?

As one Marvel fan recently noticed, there’s one tiny detail that connects the Defenders and the Avengers (aside from their comic book origins, of course), and his name is Pat Kiernan. A Reddit post from user AnkitSaha_013 notes that the same TV broadcaster shows up to deliver news in both the Spider-Man: Far From Home post-credits scene and at one point in Daredevil. So does that prove the two worlds are still connected? Not exactly.

The real-life New York City newsman often shows up as a fictional TV anchor in Marvel movies, giving the MCU an extra layer of realness. As one Reddit commenter points out, his list of Marvel movie and TV cameos includes Avengers, Iron Man 3, Defenders, Doctor Strange, The Punisher, and even Sony’s The Amazing Spider-Man 2. So to say that Kiernan’s appearance confirms any sort of shared continuity is kind of like arguing that Chappie and The Simpsons take place in the same universe because Anderson Cooper plays himself in both.

So no, Kiernan’s appearance in Spider-Man: Far From Home doesn’t prove that Daredevil is lurking on those same city streets. It’s just part of a longstanding tradition of real-life news anchors showing up in TV and movie to play themselves.

That said, with rumors swirling that Marvel could bring back the Defenders in some capacity as it continues to expand the Marvel Cinematic Universe, it might not be too long before we see Pat Kiernan onscreen once again recapping an epic battle between the Avengers and the Defenders for a fictional news broadcast.