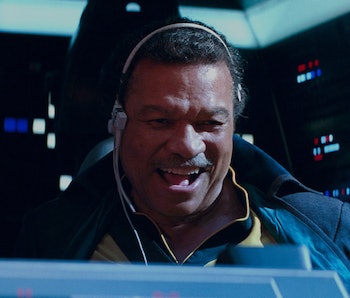 After being conspicuously absent for two films, Lando Calrissian has a lot of guts just waltzing into The Rise of Skywalker. With so much going on with the final installment of the Skywalker saga, it’s hard to believe we’re not talking about the return of Lando a little more.

In fairness, with “Dark Rey” and Emperor Palpatine lurking, Lando nostalgia is probably getting the short end of the Ewok stick. But, what does the return of the smoothest star pilot in the galaxy actually mean for The Rise of Skywalker? To put it more bluntly, there’s no way Lando is making it out of this alive, is there?

Back when we ranked the mortality odds 22 Rise of Skywalker characters, we ranked Lando the seventh most-likely to perish. But, now that the movie is inching closer and we’ve heard so little about Lando, it seems like the odds against the charming con-man might be worse than we thought.

5. Lucasfilm Has Said Nothing About Lando Lately

While this isn’t exactly a smoking blaster, the fact that J.J. Abrams and Kathleen Kennedy haven’t said much lately about Lando’s role in the movie suggests they don’t want to spoil it. There was no new Lando talk at D23, Billy Dee Williams did not appear. Now, the lack of info about Lando could be to preserve a twist about Lando maybe being the secret father of Jannah (Naomi Ackie), or hell, even Finn. But the silence could also be because Lucasfilm has been planning Lando’s death since the second it was decided he’d return. Either way, if you think about it realistically, there will be a twist with Lando. He’s not just showing up, flying around with Chewie and then going home. There have to be some stakes.

Plus, if Lando is the secret father of either Finn or Jannah, it will be a family reunion. And, family reunions never got well in Star Wars. Ever.

Because Lando and Han famously had a rivalry, you might assume that Kylo Ren actually likes Lando; like thinks of him as the cool Uncle that should have been his dad. (One in-canon novel even suggests Lando may be responsible for Kylo’s childhood interest in capes!) But, if Kylo Ren was a real person, he would hate Lando’s guts because Lando represents yet another person who was permissive of Han Solo’s bullshit behavior. Kylo Ren doesn’t romanticize the goodol’ days of Han and Lando’s adventures, just the opposite. If Kylo Ren crosses paths with Lando in the new movie, it seems very, very likely Kylo will try to kill him.

3. He Almost Died in Return of the Jedi, Twice

At one point, Lawerence Kasdan suggested Lando be killed toward the start of Return of the Jedi simply to raise the stakes of the Sarlaac pit. (Yeah, wrap your mind around that, the most important Star Wars character the Sarlaac pit eats is…Boba Fett? The Sarlaac pit sucks!) But, it’s also very clear that Lando could have easily died during the Death Star battle, too. Gary Krutz has gone on record more than once that several early drafts of Return of the Jedi were super dark, including one version where Han died blowing up the shield generator on Endor. (Which, on some level, ends up happening in a different way in The Force Awakens. ANYWAY.)

In Return of the Jedi, Lando was an A-squad character, leading a bunch of B-squad characters in a giant battle. It seems clear at numerous points in the movie that he could have easily died being a hero.

Speaking of which, though there’s been a lot of emotional deaths in the new Star Wars films, it’s hard to say that deaths of Han Solo and Luke Skywalker have been either satisfying or, you know, final. I’m not saying Han’s death in Force Awakens doesn’t work. It does. I also think Luke’s whole astral projection switcheroo with Kylo Ren is one of the best things about the The Last Jedi. That’s not it. It’s just that Han’s death seems empty and depressing, and Luke’s death is kind of a cheat since we know as a Jedi, he can just come back and hang out as a Force ghost. In other words, the most real and affecting personal sacrifice in a new Star Wars movie is bizarrely Vice Admiral Holdo in The Last Jedi. Think about it; she dies being a badass, and we know there is zero way for her to come back, meaning, the stakes feel legit.

With Han, he died getting totally chumped by his evil son. In fact, Han’s death is perhaps the most depressing character movie death of all time, simply because Han goes from being super cool in old Star Wars movies, to the victim of something tragically sad. And again, with Luke, he’s not really dead. So, who’s up for a heroic sacrifice?

Based on Lando’s actions in Solo and The Empire Strikes Back he has a huge martyr complex anyway, so it seems like know could be his moment.

1. Lando Is the Last Legacy Character Lucasfilm Can Tastefully Kill-Off

Look, there’s no way Lucasfilm will kill-off Leia in this movie, nor should they. Back when I saw The Last Jedi for the first time, I freaked-out when Leia’s ship was blown-up. I thought that was it. A guy next to me, a writer I’d known for years, was instantly offended, and whispered: “that’s really disrespectful.” Of course, about ten seconds later, we were both relieved to see that not only did Leia not die but that she was using the Force to fly through space! (Count me among people who loved this scene.)

Even if Lucasfilm had been toying with the idea of having Leia die a heroic death, there’s no way they can do it tastefully. Carrie Fisher’s tragic death in 2016 was terrible, mostly because she was still so young, vibrant and opinionated. (Fisher’s third memoir, The Princess Diarist was published just a month before her death.)

So, if there was a moment for Leia to go out in a blaze of glory, it’s clear that moment has passed. It also feels very unlikely that the three core hero characters — Rey, Finn, and Poe — will die in The Rise of Skywalker, which really makes you wonder how we’re supposed to believe in the stakes for this movie. I mean, we’re going into this thing knowing that Luke is a friendly ghost, Leia will almost certainly live, and Rey, Finn, and Poe will likely be fine too, to say nothing of Rose or Jannah. Kylo Ren is probably toast, but that’s a different story.

So, how do you make the audience worry? How do make the return of Emperor Palpatine seem legitimately scary? The answer is easy. Not only could Lando die in this movie, but he could also die in like the first act. Now you’re paying attention, right?