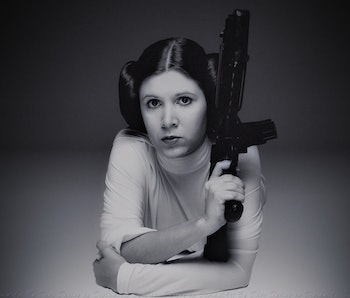 Carrie Fisher is famous for being the actor who brought Princess Leia to life in Star Wars, but professionally, Fisher’s writing resume is probably more impressive than any of her acting. Usually when an actor writes their memoir, a ghostwriter is hired to punch-up the prose. With Carrie Fisher’s memoirs, you get the the sense an editor had to ask her to actually tone it down a little. Published on Tuesday, The Princess Diarist is Fisher’s third memoir and seventh book overall. She’s also penned several screenplays, most famously, Postcards from the Edge, based on her novel of the same name.

And so, while The Princess Diarist could be classified as a “tell-all” book (spoiler alert, her affair with Harrison Ford dominates most of these pages, but you already new that) this isn’t a clunky or mopey book at all. In fact, it’s fucking hilarious. Even those casually acquainted with Carrie Fisher’s contemporary persona know she’s a true original: someone bound to make a caustic observation, or more willing to speak a certain naked truth without fear. In the quotable one-liner department, The Princess Diarist does not disappoint. In celebration of the book’s release, here are seven of the best Carrie Fisher-isms from her new memoir.

7. Early on in the book, Carrie Fisher makes observations about herself and humanity at large, particularly people in Hollywood:

“Kidding yourself doesn’t require you have a sense of humor.”

6. More disses about douchebags in the entertainment industry:

“I don’t believe people are across-the-board confident. If they are, well, they’ve misjudged the situation where there’s an arrogant result.”

5. Carrie Fisher makes fun of herself at 19:

“You’re just trying to make cyanide out of 7-up.”

4. Written by the then-19-year-old Carrie Fisher, here’s a striking line from a poem that describes Harrison Ford:

“…a real Marlboro man. The type who pours out the beer and eats the can.”

3. Fisher has feelings about Instagram culture, her own youthful “beauty,” and what it means to grow old.

“I was young and cute (even really cute, depending on who you talk to) and I loathe it now.”

2. Everyone has asked Carrie Fisher for years if she knew Star Wars was going to be a huge hit. After awhile she got tired of saying “no,” so she developed a more flippant response:

“Well, actually, I thought it was going to be an even bigger phenomenon.”

1. In terms of making appearances at conventions, Carrie Fisher held out for a long time. She has a hilarious and honest relationship with being a celebrity and an icon for so many. Here’s her beliefs about giving autographs:

“I don’t remember exactly when I started referring to signing autographs for money as a celebrity lap dance, but I’m sure it didn’t take me long to come up with it. It’s a lap dance with out cash being placed in any underwear, and there’s no pole — or is the pole represented by the pen?”

The Princess Diarist is out now from Blue Rider Press, Penguin Random House. And no, Carrie Fisher doesn’t reveal anything in her book about the filming of next year’s Star Wars: Episode VIII.