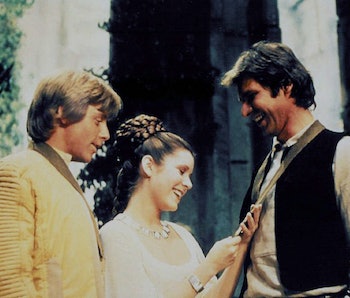 In between escaping the the trash compactor on the Death Star and returning to the Rebel Base on Yavin IV, Han Solo and Princess Leia did, in fact, sleep together during the events of Star Wars.

Carrie Fisher’s latest memoir, The Princess Diarist isn’t out until November 22, but on Tuesday, Radar obtained a copy of the book in which Fisher says she slept with Harrison Ford during the making of Star Wars. Fisher refers to their first sexual encounter as “wine sodden” and maintains Ford was a “bad kisser.” This news comes not long after Fisher claimed her counterpart Leia Organa broke up with Han after Return of the Jedi and before The Force Awakens because the roguish space pirate was also no good in the sack.

Fans have long speculated how and when Han and Leia first hooked up. Some believe they didn’t really start sleeping with each other until The Empire Strikes Back. In terms of their rapport with each other when they get to Cloud City, this has always made a certain amount of sense. But now, parallel events in the real world could impact fan theories in the galaxy, far, far away.

The original Star Wars (and early drafts of Empire) always presented Luke/Leia/Han as a mild love triangle. Obviously, all of this goes out the window in Jedi, because Leia is revealed to be Luke’s sister, but still, fans in the late ‘70s and early ‘80s hadn’t gotten this memo. Certainly, the actors didn’t know! But if Leia and Han’s behavior at all mirrors the actors who portray them, then during A New Hope, Han and Leia probably couldn’t wait for Luke to get lost. Poor Luke was a third wheel, and he didn’t even know it.

In another odd example of Star Wars art imitating life, the notion that Ford was married at the time of this affairs mirrors an in-canon Star Wars comic book storyline in which Leia discovers Han was married to Sana Solo prior to the events of the first Star Wars. In the comic, the Sana/Han marriage was revealed to be a ruse. Which is more than a little different than their counterparts in our galaxy.

The Princess Diarist will be published by Blue Rider Press (Penguin Random House) on November 22.