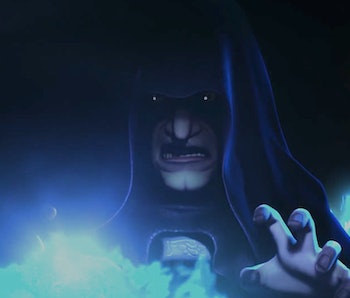 The first poster for Star Wars: Episode IX — The Rise of Skywalker has arrived, and it’s unlike anything we’ve seen before. The new image, released by Disney during its annual D23 fan celebration alongside exclusive new footage (more on that in a minute) shows Rey and Kylo Ren locked in lightsaber battle atop the fallen tower pylon where Emperor Palpatine met his end in Return of the Jedi. But it’s the faint image of Palps hovering above them that’s really fueling speculation over how The Rise of Skywalker could explains the allegedly dead Emperor’s return.

Warning! Speculative spoilers for Star Wars: The Rise of Skywalker right after this full-sized poster.

If you’ve only watched the Star Wars movies, this version of the Emperor may not look familiar. He’s not exactly the wrinkled old Sith Lord from the original trilogy, but he’s not the human-looking Sheev Palpatine from the prequels either. However, if you’ve watched the more recent Star Wars Rebels animated series, this version of the villain should ring a few bells.

In one particular episode of Rebels titled “The World Between Worlds,” the Force-sensitive character Ezra Bridger accesses a mystical plane of existence between space and time. This world is full of portals into other points in Star Wars history, and even makes it possible for Ezra to alter the past by saving Ahsoka’s life in a fight with Darth Vader.

Ezra and Ahsoka then continue walking through the World Between Worlds until they come across another portal with Emperor Palpatine on the other side. Palps is clearly aware of their presence, but can’t travel through the portal himself. Instead, he sends a blast of Force lightning their way, causing Ezra to flee back into his own time.

Why does any of this matter? Well, Rebels pretty much introduced time travel into Star Wars, and while there are plenty of other ways the Emperor could return in Episode IX, this poster seems to suggest that the version of Palpatine we get in Rise of Skywalker could be the one Ezra and Ahsoka encounter in “The World Between Worlds.”

Could this really happen? On the one hand, Rebels is Star Wars canon, and “The World Between Worlds” feels like a real Chekhov’s Time Machine situation. On the other hand, there must be an easier way to bring Palpatine back without confusing everyone who hasn’t seen Rebels (which is the vast majority of casual Star Wars fans).

Still, you may want to (re)watch “The World Between Worlds” ahead of The Rise of Skywalker, just in case.

About That Dark Side Rey With the Double-Bladed Red Lightsaber

A dark hooded figure looks up. It’s Rey. She’s in black—you’d call them Sith robes—holding what looks like two red lightsabers very close together. We then realize the sabers are connected and fold to either be a longer saber, or two sabers that almost resemble a tuning fork.

Whoa! What does this mean? Is this just another Force vision, or part of the actual plot of Episode IX? Does Rey turn evil?! No one knows for sure, but for now, we’ll leave you with this Dark Side Rey-inspired poster from our friend and popular fan artist BossLogic: