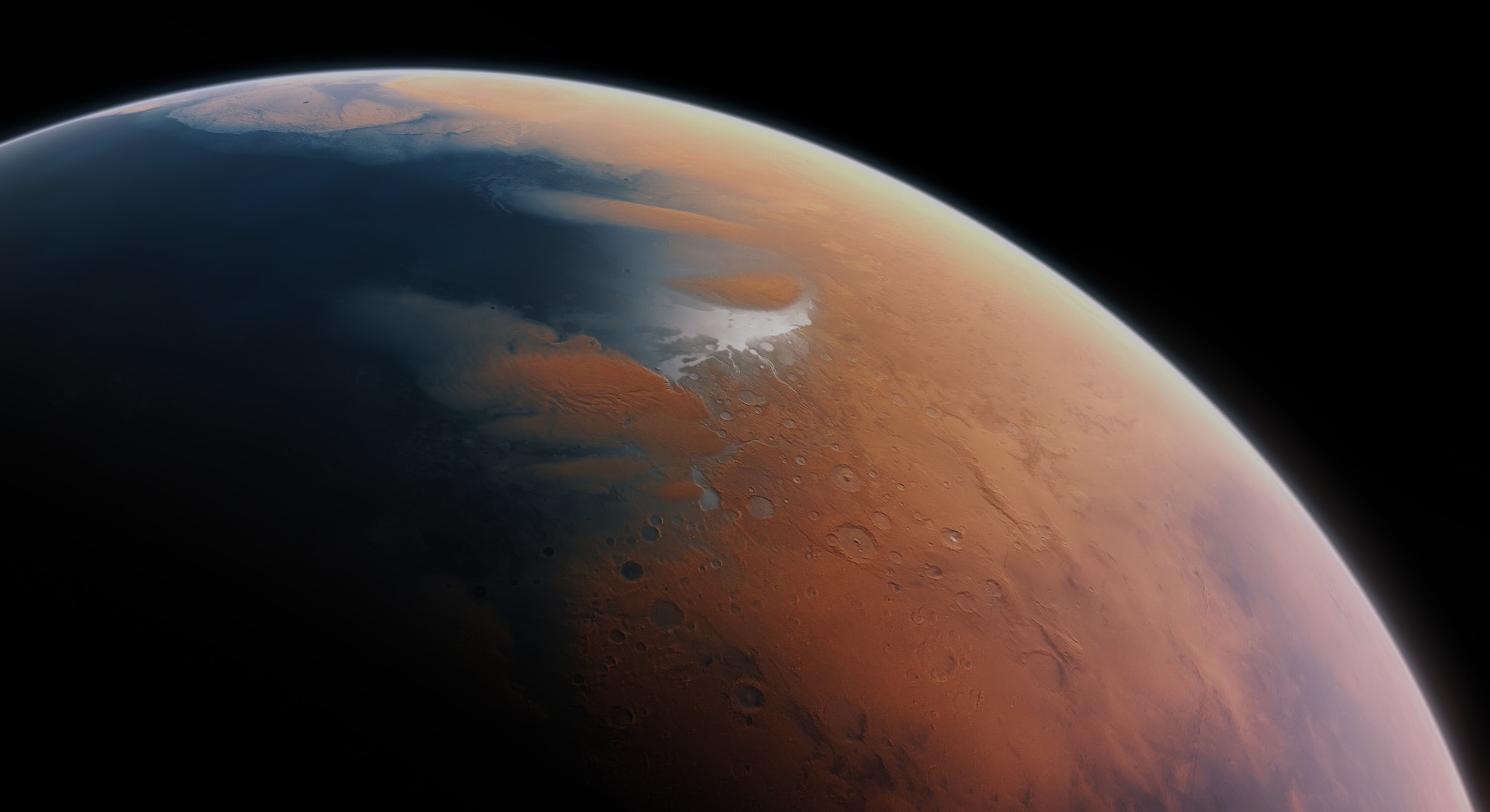 In the late hours of Thursday evening in August, SpaceX CEO Elon Musk made a bizarre declaration over Twitter.

“Nuke Mars!” he told his 27.8 million followers. Four hours later, he promised a T-shirt would launch soon, echoing his use of merchandise to promote his plan for The Boring Company. SpaceX later launched the t-shirt at $25 each.

A tech billionaire acquiring nukes to smash into the nearest planet seems like a scrapped James Bond storyline, but Musk has previously claimed there’s scientific merit to the idea. The idea would be focused on heating up the stores of frozen carbon dioxide in the planet’s poles, meaning humans could potentially move around Mars with just a breathing apparatus. Musk’s other idea is a giant mirror made of satellites that gradually releases the gas over time. Nuclear weapons sound like a drastic idea, but compared to a giant mirror, it could be both faster and slightly more realistic.

The optics are questionable, to say the very least. During a 2015 appearance on The Late Show With Stephen Colbert, Musk mentioned the same idea and Colbert responded with incredulity: “You’re a supervillain! That’s what a supervillain does!”

But Musk, who once tried to buy intercontinental ballistic missiles from Russia to send mice into space, seems unconcerned about whether he comes off looking like an action thriller antagonist.

It’s perhaps notable that, in the days after his original post, Musk elaborated on his plan to make it sound a tad less like a supervillain. On August 20, he wrote on Twitter that “nuke Mars” actually refers to “a continuous stream of very low fallout nuclear fusion explosions above the atmosphere to create artificial suns.” This, he explained, would not cause Mars to become radioactive.

Mars is not particularly hospitable to humans right now, so the logic behind nuking the planet is that humans could intervene to make it more hospitable. Musk’s philosophy is perhaps best summarized by the giant photos plastered near the SpaceX lobby in Hawthorne, California. On the left is Mars as it stands today. On the right is a hypothetical Earth-looking Mars, “terraformed” to make it fit for habitation.

Nuke Mars: Why Musk Wants to Heat Up the Red Planet

Terraforming Mars, a planet just over half the size of Earth, could provide a second nearby home for humans. The concept has fascinated science fiction writers in books like A Princess of Mars to films like Total Recall.

For Musk, who wants to establish a city on Mars by 2050 at a cost of up to $10 trillion, the idea is to transform humanity into a multi-planetary species. It could use refuelable rockets to hop further and further out, expanding and exploring. Musk said in September 2018 that “there’s so many things that make people sad or depressed about the future, but I think becoming a space-faring civilization is one of those things that makes you excited about the future.”

In March 2018, Musk cited a rather less optimistic reason for colonizing Mars. During the SXSW conference in Austin, Texas, Musk stated that such a colony would be better protected from an apocalyptic scenario, adding that “if there’s a third world war we want to make sure there’s enough of a seed of human civilization somewhere else to bring it back and shorten the length of the dark ages.”

Experts have warned Inverse, however, that base-dwellers could suffer from a number of social and psychological issues. Trapped indoors, architects would have to design habitats with liveable spaces, avoiding cabin fever and encouraging cooperation.

In the worst-case scenario, the Mars city could collapse into nationalistic in-fighting. Terraforming could give humans a greater degree of freedom to move around and make the planet an altogether more pleasant place to live.

It’s not the first time Musk has suggested using nuclear technology to boost humanity’s plans for Mars. In July 2019, he recommended nuclear rockets would be “a great area of research for NASA,” boosting trips to Mars that could cut down the flight time to just 100 days.

Nuke Mars: How the Plan Could Work

Mars is cold. Like, 217 Kelvin cold. That’s around minus 81 degrees Fahrenheit. Heating up the planet, essentially fueling climate change on Mars, could make it slightly more hospitable.

The planet is also home to a large carbon dioxide store. Heating up the planet could release the gases and water at the poles. These stores are left from when a wetter Mars may have orbited the sun. This Mars, which may have existed 4 billion years ago, may have had water up to a mile deep in some areas. Scientists theorize that this may have been stripped away by solar winds pushing away the Martian atmosphere over time.

Research published in the journal Geophysical Research Letter in 2015 suggested there could be up to 150 billion cubic meters of ice on Mars — enough to cover the planet with 1.1 meters of ice. Release enough carbon dioxide, the theory goes, and Mars will experience an Earth-like self-sustaining climate change.

“You could start turning Mars from a red planet into a green planet,” Michael Shara, curator of the American Museum of Natural History’s astrophysics department, told NBC News.

Shara noted that, while the idea seems unrealistic, nuclear weapons offer a lot of benefits. They’re relatively compact versus the amount of force they can contain. They can be designed to leave little long-lasting fallout, avoiding a Chernobyl-style disaster. It may take decades or even centuries for the planet to reach a hospitable state, but at that point the original nukes probably wouldn’t pose much of a threat.

Musk stressed in August that the artificial suns would not cause Mars to become radioactive. In response to a question about the risks, he stated that the reaction could be adjusted in real-time. The goal would be to find the most effective way to convert mass to energy, to compensate for the long distance from the sun.

Musk has even set his sights on ice formations that could do with some heat. In December 2018, he joked on Twitter, that the Korolev crater “needs a warmup.” The 50-mile-wide site hosts a 1.12-mile-wide pile of water ice all year round in the planet’s northern lowlands.

Nuke Mars: Why It May Not Work

Musk’s plan has faced scrutiny from the scientific community. Bruce Jakosky of the University of Colorado, Boulder, and Christopher S. Edwards of Northern Arizona University published a paper in the journal Nature Astronomy in July 2018 arguing that no, there isn’t enough carbon dioxide on Mars to terraform the planet. Studying existing technology and estimates of Mars’ carbon dioxide stores, the paper’s abstract paints a bleak picture:

These results suggest that there is not enough CO2 remaining on Mars to provide significant greenhouse warming were the gas to be emplaced into the atmosphere; in addition, most of the CO2 gas in these reservoirs is not accessible and thus cannot be readily mobilized.

The pair estimated that the polar caps would be enough for around 15 millibars of atmospheric pressure. Vaporizing the carbon-rich sedimentary rocks from Mars’ watery days would release around 12 millibars. For comparison, Earth’s atmosphere at sea level is around 1,000 millibars.

There’s a massive amount of CO2 on Mars adsorbed into soil that’d be released upon heating. With enough energy via artificial or natural (sun) fusion, you can terraform almost any large, rocky body.

Jakosky and Edwards responded to Musk by admitting that, yes, there may be more carbon dioxide up for grabs. Releasing the gas would be incredibly difficult, though, and would require new technology that doesn’t exist yet. Something like a giant mirror as big as Mars could do the trick, or even releasing extra pollutants into the atmosphere. Neither of these are likely in the next few decades, nor are they likely to produce anything close to the SpaceX lobby photo.

“You would still fall well short of a bar,” Jakosky told Discover Magazine. “But you would get some significant warming and significant pressure.”

It’s not the only option open to Musk and his team of planet-explorers. NASA released a book in 1976, spotted by SingularityHub, called On the Habitability of Mars: An Approach to Planetary Ecosynthesis. The book describes a method of terraforming Mars by using photosynthetic organisms, genetically modified to heat up the ice caps.

Musk has also floated an alternative plan of his own, to use giant mirrors to beam light down onto the planet. It’s unclear how this would work, but one idea cited by Musk was to use mirrors with a 100-kilometer radius at the poles. These mirrors would weigh 200,000 tonnes if constructed from a solar sail-like material. The plan was developed by Robert Zubrin and Christopher McKay, who also claimed that this could release enough carbon dioxide to support an atmosphere of 300 to 600 millibars.

But even if Musk solves these issues, others have warned that meddling in the Martian atmosphere could have unintended consequences. Gary King, a microbiologist at Louisiana State University, warned NBC News that “cloud formation could have a dampening effect, for instance, cooling Mars rather than warming it.”

It wouldn’t be the first time humans have experimented with nature and faced unintended consequences.

🚀 Sign up for Musk Reads, the must-read email newsletter about the world of Elon Musk.