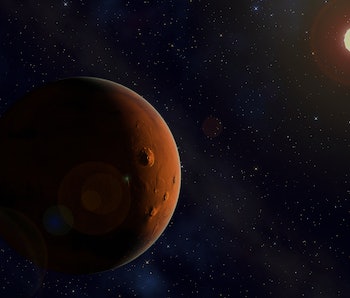 The announcement of the discovery of flowing water on Mars has — with a bit of help from The Martian — intensified discussion of human colonization, and Elon Musk is angling to take advantage of Big Red’s natural gifts with some world changing detonation. Musk had previously discussed his desire to nuke mars. Today, he elaborated on that plan, saying his goal would be to create “tiny pulsing suns over the poles [that are] above the planet, not on the planet.”

This concept, which Musk discussed at an event for his renewable energy company SolarCity, is one of several ideas floated by scientists interested in terraforming Mars. The fundamental idea is to alter the Martian surface temperature in order to make it a bit friendlier to colonists. The current surface temperature on the Red Planet averages 217 Kelvin, or about -81 degrees Fahrenheit.

“So if you have two basically tiny suns over the pole, that would warm up the planet,” Musk reporters. “Then, you would gasify frozen carbon dioxide, thicken the atmosphere and warm up the water and all of that would have a greenhouse effect, a cascading effect, to continue warming up the planet.”

Musk alluded to a “fast” and “slow” way to turn Mars from interstellar fixer-upper to Earth-like bio-dome in an interview with Stephen Colbert in September.

“A lot of people don’t appreciate that our sun is a giant fusion explosion,” he said, downplaying the effect nuclear explosions would have on the Mars surface. According to a non-scientific rendering by George Lucas, Musk’s first colony would look something like this: