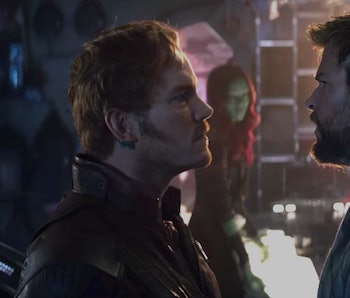 The galaxy’s greatest A-holes have a new member on the team: Thor, the God of Thunder, who joined the ragtag heroes aboard the Benatar at the end of Avengers: Endgame. But on Instagram, reinstated director James Gunn assured fans that they will still be named the Guardians of the Galaxy.

On Instagram, James Gunn answered a series of bizarre questions (more like demands, really) on his stories page. Such demands included fans asking for Lady Gaga on the soundtrack to Guardians of the Galaxy, Vol. 3 and a Michael Rooker cameo in Gunn’s The Suicide Squad, which is expected to begin production soon. But one fan pleaded with the director, “Please do not let the movie be named Asgardians of the Galaxy,” to which Gunn replied, “Don’t worry.”

There you have it! Despite an Avenger A-lister like Thor joining the Guardians of the Galaxy, Thor is still very much a member and not its new lead star. The Benatar is still Star-Lord’s ship. Or so Star-Lord thinks.

At the end of Avengers: Endgame, Thor (Chris Hemsworth) joined the Guardians of the Galaxy after handing New Asgard (the remnants of the proud Asgardians, now living on Earth as refugees) to Valkyrie (Tessa Thompson). With nothing left for him on Earth, and the planet no longer in need of the “Strongest Avenger,” Thor joins the Guardians aboard their ship in search of new adventures.

Behind the scenes, Avengers: Endgame was to be the last Marvel film in actor Chris Hemsworth’s contract. But Hemsworth, so invigorated with Thor in the making of 2017’s Thor: Ragnarok, opted to extend his contract by an unknown amount of films, though it’s presumably only one more film.

“I felt like we re-invented him,” Hemsworth told USA Today in 2018. “There is a bigger platform now to continue if we want to.”

But whatever becomes of Thor, fans won’t know for awhile. After Men in Black: International, which underperformed at the box office, Hemsworth is taking a pause from his career to spend the rest of 2019 with his family. Considering that the actor’s starred in some of the biggest movies in history, with a paycheck to match, it’s a well-deserved break that could allow the God of Thunder to recharge should he ever return for Guardians of the Galaxy Vol. 3 or whatever else Marvel has planned for the God of Thunder.

There is no release date set for Guardians of the Galaxy, Vol. 3.