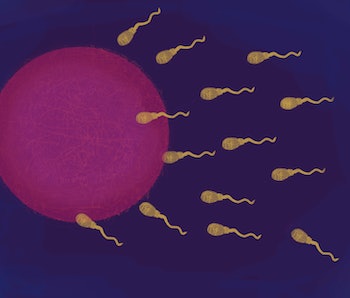 In 2015, scientists estimated that between 40 and 50 percent of the world’s infertility cases are due to a “male factor.” That could mean a number of things: sperm shape, the amount of sperm a man produces, or the pitfalls that befall healthy sperm en route out of the body. But new research to be presented at the European Human Genetics Conference on Sunday tracks the issue to male DNA itself.

Previous studies have already shown that men can inherit some aspects of infertility from their parents. But this study, co-authored by Joris Veltman, Ph.D., the director of the Institute of Genetic Medicine at Newcastle University, and Manon Oud, a Ph.D. student at Radboud University Medical Center, takes a different approach, focusing not on inherited mutations but those that occur uniquely in each individual — known as de novo mutations.

Veltman, whose findings have yet to be published in a journal, tells Inverse that their findings present “a completely different way in which genetic mutations can cause infertility,” noting that this is “the first time a study on this topic is performed.”

Veltman and Oud focused on men with “severe spermatogenic failure” — those who either produced no viable sperm (called azoospermia) or only small amounts of viable sperm, approximately less than 5 million sperm per milliliter of ejaculate.

In their sample of 108 men with severe spermatogenic failure, the team discovered 22 mutations that may underlie the struggle to conceive. These mutations were present in the infertile men, but not their fertile parents.

Overall, these men had patterns of de novo mutations that differed from their parents but seemed to affect a similar group of genes related to sperm production and infertility.

Veltman and Oud posit that the 22 de novo mutations identified in their study could underlie the “severe spermatogenic failure” of their participants because they occurred in the genes involved in sperm production. They point to two genes, in particular, that took serious mutation hits: TOPAZ1 and ODF1. Mutations within these genes are “likely to disrupt normal gene function,” they write.

It’s early days for this research, and the authors note in their presentation abstract that the findings will need to be replicated. Right now, they’re running tests in fruit flies (which, for the record, have impressively large sperm) to collect more evidence that the de novo mutations they identified are linked to male infertility. Down the line, knowing which mutations to look for could help predict how effective assistive reproductive technology might be for an individual and who may need to consider the options more seriously.

The de novo mutation perspective could be very illuminating for men who suffer from severe infertility. However, on its own, it can’t completely explain the wider patterns in sperm health observed around the world.

Sperm counts have declined by as much as 50 percent in men in North American, Europe, Australia, and New Zealand, researchers reported in 2017. While genetics likely plays a factor, there is a host of other factors that might be driving drops in sperm count more globally. They include but aren’t limited to exposure to man-made chemicals, obesity, and long-term stress. Overall, it’s a complicated picture, says Veltman.

“In general, we know very little about why men are infertile,” he adds. “When it comes to infertility, the man is often overlooked, and there are very few tests done to learn more about the underlying causes of his infertility.”

Human reproduction is vital to our species but worldwide infertility affects 1 in 6 couples, of which half of the cases are explained by a male factor. Although thousands of genes are known to be involved in spermatogenesis, the genetic causes behind severe spermatogenic failure remain largely unknown. De novo mutations (DNMs), that arise spontaneously in the germline or postzygotically, are known to play a prominent role in early-onset disorders with reduced fitness. Here we report on the first exome sequencing study to investigate the role of DNMs in male infertility. We examined and sequenced 108 patients suffering from azoospermia or severe oligozoospermia (<5 million sperm/ml) and their fertile parents. In total, we identified and validated 92 protein-altering DNMs, which show an enrichment in protein network edges. Also, we found an enrichment of loss-of-function (LoF) variants in extremely LoF intolerant genes. Of all DNMs, 22 are likely to disrupt normal gene function and lie in genes involved in sperm production such as TOPAZ1 and ODF1. Complementarily, we detected de novo copy number variants in 2 patients affecting multiple genes involved in cell replication and gamete production. Currently, we are performing replication studies in additional cohorts to identify recurrently mutated genes. Additionally, detailed phenotypic re-evaluation of patient phenotype, immunofluorescence stainings of patient material and genetic screens using Drosophila Melanogaster are being performed to more confidently link genes affected by a DNM to male infertility. Our data provide the first indications that DNMs may play an important role in severe male infertility.

More like this
Mind and Body
Jan. 31, 2023
Why Is My Skin Worse in Winter? 5 Conditions Dermatologists Watch out For
By The Conversation, Jeffrey Chen and Sonal Choudhary
Science
Jan. 22, 2023
Infection expert answers 7 top questions about Covid-19’s “Kraken” subvariant
By The Conversation and Sameer Elsayed
Mind and Body
4 hours ago
Meet the Scientists Who Want to Make Medical Devices Eork for Everyone, Finally
By Miriam Fauzia
LEARN SOMETHING NEW EVERY DAY.
Related Tags
Share: