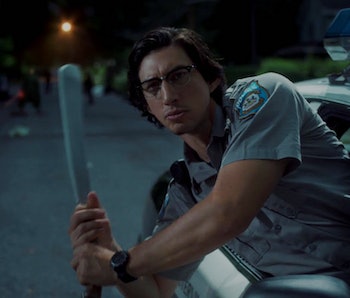 The most self-aware zombie film of all time, The Dead Don’t Die, knows that one of its actors was a mostly unknown but rising star before his casting in Star Wars: The Force Awakens made him super famous, and the movie flaunts this in one of the more meta moments by tossing in an obvious Star Wars reference related to Adam Driver’s overly calm character, Officer Ronnie Peterson.

Here’s your spoiler warning if you care about The Dead Don’t Die’s Star Wars references. Read our full breakdown of the movie’s ending here.

In a star-studded cast that includes Bill Murray, Selena Gomez, Tom Waits, Steve Buscemi, Danny Glover, and the Wu-Tang Clan’s RZA, Adam Driver could very well be the most famous of the bunch — at least by 2019 standards. Even if you hate that Kylo Ren killed his father, Han Solo, in The Force Awakens, you can’t help but love Driver’s performance as an angst-fueled emo millennial distillation of a Sith Lord. He became the new big bad after killing Supreme Leader Snoke in The Last Jedi, and Driver will reprise the role once more in December’s The Rise of Skywalker to close out the nine-film saga.

Driver tempers that rage for his Dead Don’t Die performance to an absolute deadpan. You don’t see Kylo Ren at all behind those geeky glasses, especially as Driver rides around in a red convertible Smart car.

The Dead Don’t Die’s production reportedly had to work around Adam Driver’s Star Wars shooting schedule, causing enough conflicts that director Jim Jarmusch had to omit a role that was to be played by James Bond actor Daniel Craig (also technically a Star Wars actor).

Midway through The Dead Don’t Die, when all four of the main characters (the three police officers and Tilda Swinton’s odd Scottish mortician) convene at the police station, Swinton’s character asks to borrow Officer Peterson’s little car. He reluctantly agrees, and when he hands over the keys, we’re forced to notice that the single keychain is of an Imperial Star Destroyer from Star Wars.

If you miss it, Swinton’s character points it out for you. “Star Wars,” she says, elated. “A wonderful fiction.” When you later learn that she’s an alien, it gets even funnier.

Over time, The Dead Don’t Die’s humor becomes so dry and deadpan that it borders on the unenjoyable, to the extent that the only thing that might’ve redeemed it in the end would have been full-blown insanity in the film’s finale act. It gets close, but maybe not close enough.

In the town cemetery, Chief Robertson and Officer Peterson make their last stand against a horde of the undead: Bill Murray fumbling around with a shotgun while Adam Driver hacks away at heads with a machete.

I found myself wishing that The Dead Don’t Die would’ve found a way to transform Peterson into Kylo Ren, surprising the viewer by giving the calm cop a laser sword and telekinetic powers that would allow him to easily demolish the undead in a fit of sci-fi violence on par with Darth Vader’s epic murder spree in Rogue One. It almost felt possible, especially because moments before, Adam Driver straight-up told Bill Murray he’d read the full script. Murray, on the other hand, only got the scenes he’s in. (Yeah, they both deliberately break character to make this joke.)

The increasingly meta moments could’ve escalated into something violent and wonderful. But alas, The Dead Don’t Die’s Star Wars references stop at a tiny keychain of an Imperial Star Destroyer handed over by a man much too tall to be driving around in a Smart car.

The Dead Don’t Die is in theaters now.