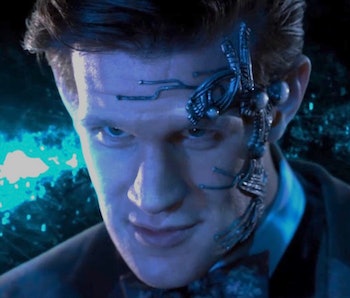 Back in February, before we even knew what Star Wars: Episode IX was called, a massive leak claimed to reveal new characters and costumes for the upcoming movie. Since then, a lot of those alleged spoilers have been proven true thanks to the release of an official trailer for The Rise of Skywalker, but one unresolved part of that leak may just explain the biggest remaining mystery about Episode IX: The identity of Matt Smith’s character.

Possible spoilers for Star Wars: The Rise of Skywalker ahead.

Lucasfilm still hasn’t confirmed that Matt Smith (best known as the 11th Doctor in Doctor Who) is actually involved in Rise of Skywalker, but he’s been rumored to be in the upcoming Star Wars movie for almost a year. Last August, Variety reported that Smith had been cast in Episode IX for an unconfirmed role. Since then, we haven’t heard a single mention of his character. He wasn’t even in the trailer, which did reveal one huge twist with the return of Emperor Palpatine.

This has led fans to wonder if Smith’s involvement could be part of an even bigger twist, possibly connected to Palp’s resurrection. Could he be a new disciple to the Sith lord? A host for the Emperor’s spirit after his body was destroyed? Something else entirely?

We still don’t know, but as one redditor recently pointed out, we may already know what Matt Smith will look like in Star Wars: The Rise of Skywalker.

“Why is no one discussing this obvious villain?” writes redditor u/theblackacre. “On the character leak pics, This is listed as alien concept art. But we are looking at some sort of dark side henchmen, or could it be concept for Matt Smith?”

Aside from the fact that this thing looks scary as hell, the image doesn’t reveal much. Its face is covered, so we guess it could be Matt Smith. This definitely also looks like the kind of guy the Emperor would hang out with. And that mask may hide the disfigured face of a man who’s handed control of his own body over to a powerful Sith.

Then again, this could literally be anyone — or no one. It might just be some random concept art that made it into the leak but won’t appear in Star Wars: Rise of Skywalker.

But Matt Smith has to play someone, right? At this point, Star Wars is clearly keeping it a secret for good reason, and putting the recognizable actor behind a horrifying mask is a pretty legit reason to keep the entire thing under wraps.