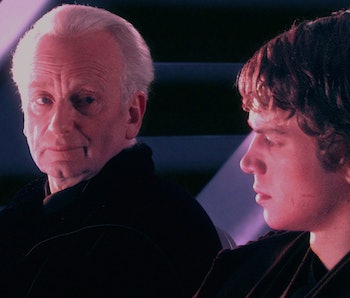 The Rise of Skywalker might be the most confusing Star Wars title ever. Does it refer to Luke Skywalker? His nephew Kylo Ren? Rey, somehow? The Emperor? Or maybe an entirely new class of Force users that aren’t Jedi or Sith? All options seem possible, but a new Episode IX theory reminds us that we’re forgetting one extremely important Skywalker: Anakin (aka, Darth Vader).

Warning: Speculative spoilers for Star Wars: Episode IX — The Rise of Skywalker below.

Stay with me here. I know Darth Vader died in Episode VI, but so did the Emperor, and apparently he’s back. Plus, if Anakin Skywalker’s fate was to “bring balance to the Force” then he’s clearly not done. With Palpatine on the rise, it will take an equally powerful Force user to take him down once and for all. That could be Anakin, finally fulfilling his prophecy (again) and bringing the entire Skywalker saga full circle.

On Reddit, Darth Vader fan u/vadrr21 argues that not only does this theory make sense from a narrative perspective, but also from a grammatical one. (Again, stay with me.) After all, if the title referred to a whole new class of Force users there would be a “the” before “Skywalker” in the title. That’s why Episode VI is called Return of the Jedi, and not just Return of Jedi.

Ok, grammar lesson over, because there’s one more important point in u/vadrr21’s argument worth discussing. They write:

From a directorial perspective, it makes sense. The team had the confidence to reveal Palpatine’s return, which could have been a major twist in the movie, eight months before it’s release. Meaning they have bigger surprises in stock. What is bigger than Palpatine’s return? Anakin’s return.

The return of Emperor Palpatine feels like a huge plot twist. So why would director J.J. Abrams reveal it almost a year before the The Rise of Skywalker’s release? It could be an attempt to get ahead of any potential leaks, but the more likely scenario is that there’s an even bigger surprise still coming. Bringing back Darth Vader (arguably the most famous) Star Wars character of all time, would definitely do the trick.

At the very least, you can probably expect some sort of appearance from Anakin/Vader in Star Wars: Rise of Skywalker. Back in October 2018, Ryan Britt wrote for Inverse that is seemed “impossible” Darth Vader wouldn’t show up in some form during Episode IX. And a few months later, leaks seemed to confirm that evil Anakin Skywalker from Episode III could appear in the new movie, all while also dismissing the possibility that Vader had somehow survived.

So while we’re still a little foggy on how exactly Anakin Skywalker will appear in Star Wars: The Risk of Skywalker, the fact that he’ll make some sort of appearance seems all but certain. In that case, why wouldn’t the movie’s title refer to the most famous character in its cast? We’re pretty sold on this theory, but we’ll have to wait until Episode IX’s release to find out for sure.