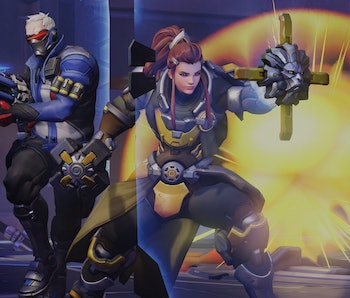 We could be looking at a new Omnic Crisis when Blizzard releases Overwatch 2 several years for now. A new report reveals that the company has cancelled development on a StarCraft first-person shooter to instead focus on Diablo 4 and Overwatch 2. Inside sources even compared Overwatch 2 to the Left 4 Dead franchise, which sounds like the perfect way to finally tell the story of Overwatch.

Official announcements likely won’t come until BlizzCon in November, but Kotaku reported on Thursday that, according to two Blizzard staff, Overwatch 2 was becoming a primary focus of the company’s development resources. A StarCraft game had supposedly been in development for up to two years before getting cancelled. Blizzard told staff they were investing resources into Diablo and Overwatch instead.

“What we’ve heard about Overwatch 2 (or whatever it winds up being called) is that it’ll have a large PvE element,” Kotaku reveals. “(A couple of Blizzard people have compared it to Left 4 Dead.)”

Since its release in May 2016, Overwatch has focused almost exclusively on PvP — or Player vs. Player — gameplay, pitting two teams of six human players against each another in an objective-based game mode. Players love the colorful cast of characters and engaging gameplay, so they’ll be excited to find out that Blizzard has plans to mix things up in a huge way for the sequel.

Different Overwatch game modes break the PvP standard with free-for-all combat or other variations, most notably during some seasonal events like Retribution, Uprising, or Junkenstein’s Revenge, which dabble in co-op PvE (Player vs. Environment) horde and/or tower defense game modes.

Overwatch has a rich universe that’s only hinted at in sparse pieces of dialogue spoken by the character’s in-game, and even when it’s expanded via comics or Pixar-style cinematic shorts, we still don’t get to experience much of it.

Most Overwatch fans welcome the inclusion of the more story-focused PvE gameplay, like when Retribution allowed players to experience the mission that led to the downfall of Overwatch (the name of a peace-keeping paramilitary organization in the game’s world) years before the game’s half-baked story begins.

So for an Overwatch sequel to be riffing on Left 4 Dead is a big deal, because it means that Blizzard is looking to enhance aspects of the game that fans want the most: More story-driven PvE gameplay.

Left 4 Dead is a first-person zombie survival shooter published by Valve Corporation that has optional co-op for up to four characters who fight against hordes of the undead. (You can also play solo with three A.I.-controlled allies.)

The story is a bit generic, but the game’s most impressive development feature is the Director, an A.I. software that procedurally generates changes to the game each time you play it. Items and enemies spawn in different locations and with varied frequency, and the Director analyzes each player’s skill and style of play to adjust the difficulty or narrative tension accordingly. Even the music mix changes on the fly to enhance the experience.

If Blizzard is considering adopting a similar kind of A.I. to enhance a PvE co-op mode, it’ll provide an exciting way for to finally flesh out the world of Overwatch. Blizzard has already perfected online PvP and created a thriving esports community with the Overwatch League. Incorporating something like the Director into a new PvE element could complete the Overwatch experience and establish it as a long-lasting gaming franchise.

Blizzard’s official statement in response to the Kotaku report doesn’t name any upcoming projects specifically and instead explains the company’s rationale for withholding development plans from the public.

“We always have people working on different ideas behind the scenes — including on multiple projects right now — but the reason we tend not to discuss them publicly is because anything can happen over the course of development. As has been the case at Blizzard numerous times in the past, there is always the possibility that we’ll make the decision to not move forward on a given project.”

In other words, the company doesn’t make official announcements until it’s sure the game is actually happening. At this time, the Overwatch sequel remains unconfirmed, and it might never come to fruition. There’s no telling how long we may have to wait, but this news is a great sign that the franchise is moving in the perfect direction.

Overwatch 2 isn’t even official, so there’s no way to predict a release date at this time.

More like this
Gaming
5.5.2022 1:30 PM
Elder Scrolls 6 needs to learn from the series’ most ambitious game
By Bryan Lawver
Gaming
5.6.2022 5:53 PM
Overwatch 2’s cratering Twitch views may not mean what you think
By Jess Reyes
Gaming
18 hours ago
2022 game releases: The 14 biggest games launching this summer and fall
By Bryan Lawver
Related Tags
Share: