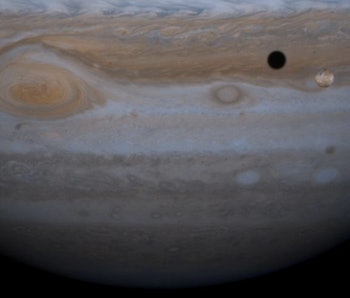 The month of June offers some spectacular stargazing events, including a rare appearance of Jupiter, the largest planet in the solar system, which will be closer to Earth on Monday than any other time in 2019.

Amid stars and other planets, Jupiter will be visible on Monday, June 10 without the need for a telescope. If you’ve got a pair of traditional binoculars, you should be able to find it.

Jupiter will appear big and bright in our night sky because it will be positioned directly opposite to the sun from our point of view from Earth, and well-illuminated from sunset to sunrise. This celestial event is called Jupiter at opposition.

See also: The 5 Best Stargazing Apps for iPhone and Android

Jupiter is the fifth planet from the Sun, and the largest in the Solar System – it’s over 1,300 times the size of Earth. It’s named after the Roman god Jupiter, and as of 2018, it’s known to have 79 moons.

Jupiter is also fastest-spinning planet in our Solar System, which means a day on Jupiter is just shy of 10 hours. However, because it’s a gas planet, it does not rotate as a solid sphere. Jupiter’s equator rotates a bit faster than its polar regions at a speed of 28,273 miles/hour. Jupiter’s day varies from 9 hours and 56 minutes around the poles to 9 hours and 50 minutes close to the equator.

"Jupiter takes almost 12 years to go around the Sun."

“Both Earth and Jupiter go around the Sun in approximately circular orbits centered on the Sun. Earth’s circle is much smaller and Earth travels faster. As a result, the Earth goes around the Sun in one year, whereas Jupiter takes almost 12 years to go around the Sun,” Dr. Bruce Betts, Chief Scientist at The Planetary Society explains to Inverse.

“If Jupiter weren’t moving, Earth would come closest to Jupiter every one year. Because Jupiter is also moving, though comparatively slowly, around its orbit, it is actually about every 13 months that Earth and Jupiter come closest to each other in their orbits. That is when Jupiter is on the “opposite” side of Earth from the Sun which is why it is called opposition.”

"It is actually about every 13 months that Earth and Jupiter come closest to each other in their orbits."

Jupiter comes into opposition with Earth every 13 months, so each year it seems to come a month later. Last year it happened in May, and in 2020, it will happen in July.

Jupiter and Earth are farthest from each other — also every 13 months — when Jupiter is on the opposite side of the Sun from Earth. That’s called solar conjunction. That moment is the worst time of year to see Jupiter.

The precise moment of Jupiter-at-opposition on Monday is around 6 p.m. Eastern. But don’t worry, even if the sun hasn’t set where you live, Jupiter will be visible all night.

How to See Jupiter in the Sky on Monday

Look to the southeast and it will be the brightest object in the night sky — besides Venus and the moon — so you won’t need a telescope to see it. However, with even a small telescope, you’re in for a treat.

Weather permitting, you’ll be able to make out the planet’s cloud bands and some of its largest moons including, Io, Europa, Ganymede, and Callisto, all changing positions through of the night. Depending on the telescope’s power, you might be able to see its famous (and shrinking) great red spot.

Throughout the night, Jupiter will arc high in the sky and by midnight, it will be overhead. Jupiter will be near Spica, the brightest star in the constellation Virgo, but it will shine brighter than the actual star. It will set around sunrise, at 6:59 a.m. Eastern.