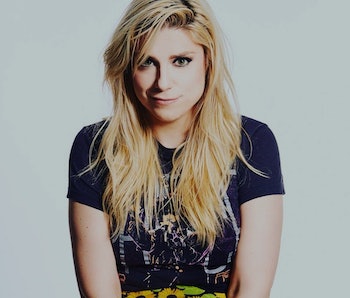 This week, we’re talking with the talented Lane More about how to deal with Sunday nights. Moore is a former writer for The Onion, sex and relationships editor for Cosmopolitan, creator of comedy show Tinder Live, author of How to Be Alone: If You Want to, and Even If You Don’t, and front person in the band It Was Romance. Below, Moore talks about how she handles the “Sunday Scaries” — even when they’re not actually on Sunday.

Do you ever get Sunday scaries?

I was thinking about this, and at first, I wanted to say, “Oh, I don’t feel that way anymore” because I don’t have a traditional Monday. I felt it all the time when I had more of a traditional 9 to 5 and when I was in school.

But now that I don’t have a traditional schedule, and I make my own for the most part, I realized a fun new thing — when you’re self-employed, you can get Sunday scaries every night of the week. They can actually happen more. The thing that people don’t tell you about being self-employed is that, depending on how you look at it, Monday can be every day.

The feeling isn’t as crystallized as it used to be, but I occasionally still get it. To sound a little hippie for a moment, I think that even if you don’t go into an office on Monday, there’s still this collective, looming feeling on Sunday, and one can feel sensitive to it. You can feel everyone resting, settling down, and getting ready to go do stuff they don’t want to do.

Over time, have you learned what things you can do to be kind to your brain and combat anxious feelings?

I was thinking about this last night. I’ve been working on the second It Was Romance album for what feels like forever, and we got one of the first mixes back last night. It’s a song that I wrote a long time ago about feeling like there was nothing to be excited about in life — but still having that little bit of faith to get you to the next day.

While I was listening to it, I realized that I write music and I write books and I write jokes and all these things for other people — but I also write them to help me survive my own life. And sometimes something sort of magical happens. In this situation, I was listening to a song I wrote because I felt that way at that moment, and years later I’m listening to it polished when I needed to hear those words so badly.

It ends up being this little, weird rubberband moment. I remembered that it has always been true that creating art has been what has kept me alive. A lot of things I wrote in the book were things that I needed to hear myself, and I think that has always been a huge coping mechanism. To be like, I feel like shit. Okay — now I’m going to go write this song, and it makes me happy to know it exists.

My dog also ends up being super grounding because even when I’m spinning around in my head, I can remember, “It’s just a day, you’re alive, and your dog is alive.” It helps take the “what ifs” weight away and helps me focus on the good things in life.

I find it refreshing that, in your art and online, you’re pretty open about mental health. Do you think it’s important to talk publicly and be transparent about that type of stuff?

I think for a long time I wasn’t sure how much I could do, in terms of being open. I think that we do kind of section off things, although we’re doing it less and less.

When I was known primarily as a comedian, I felt like, “Hmm, can I talk about having very deep feelings,” or do I have to be like, “Yeah, things are like, whatever.” Because so much of comedy is this too-cool-for-school attitude, and I’ve never been that person. For a while, I was really divided. I would go write for the New Yorker or The Onion and be witty, and then I would go write my It Was Romance music and be really intense and speak more to these personal things that I didn’t feel like I could talk about in a different venue.

And then, at a certain point, I just started trying it. It started on Twitter first. I started talking about more personal stuff, and I realized that people were receptive to both sides of me. I want to be able to be all things. I’m still conflicted about it sometimes, but not as much, because I think with the world being as it is right now, I don’t think people really want to hear that nothing is serious. We want people who can, sure, tell a joke but also care that the world is burning.

Do you think alone time comes with benefits?

As a kid, I felt that way all the time — the pressure to go to parties and things like that. But at a very early age, I realized that whenever I try to make myself do that, I wish I was at home. So the question became: “How do I figure out what society is telling me to be but also respect what I know makes me comfortable?”

I still kind of grapple with that, and it was definitely a huge part of the book. I wanted to explore what it means to be alone versus lonely. It’s a book about why people feel so alone, and it’s also a book that’s designed, and I hear this from people, to make you not feel so alone.

Because I felt alone my entire life, and really was. I raised myself. I’ve been on my own for most of my life. I felt very frustrated — and I still get frustrated sometimes — with how much I felt that everyone had the perfect family and no one had problems like me. That’s what the world was telling me, and I felt so much like there was something wrong with me.

But then I did my own research, went to therapy, analyzed it all, and got to a place where I knew I needed to tell my story. And now I receive hundreds of letters from people who say, “I felt like I was the only one who was so alone, and now I know I’m not.”

That kind of loneliness, I think so much of it has to do with shame and fear we keep in because we’re afraid that no one else feels these feelings. We only get to see what’s reflected in media. There are all these people with untold stories, and because they are untold, we think we’re the only ones who have them.