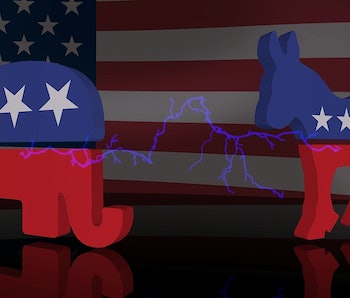 The vast gap between liberals and conservatives is growing. This trend, known as political polarization, means that ideological extremes become more powerful and moderate voices lose influence — a trend that can, historically, create a threat to democracy. So-called political echo chambers — communities either in physical or digital space full of individuals who mostly agree with each other’s political views — are a common scapegoat for deepening divisions. However, a study released Monday suggests these spaces can actually benefit the political process.

In the paper, published Monday in Proceedings of the National Academy of Sciences, social scientists report that collective intelligence can emerge from echo chambers, even when the groups of people in them hold partisan biases. When it comes to knowing accurate facts about politics, exposure to a homogenous network doesn’t automatically mean that bias promotes misinformation. Instead, knowing what others think is accurate can improve your own knowledge of the political landscape.

Joshua Becker, Ph.D. is a Northwestern University researcher whose past work has shown that “collective intelligence,” or social information processing, can improve the accuracy of people’s beliefs in a wide range of circumstances. However, he tells Inverse that there’s been a concern that this accuracy wouldn’t hold when people discuss controversial topics, in which beliefs are motivated by personal biases. Bias amplification, he explains, is a risk when polarized individuals only interact with people who share their opinions.

“We live in a world where people tend to interact only with other people that share their beliefs,” Becker says. “One of the most consistent findings in social research is that networks are shaped by homophily — i.e. birds of a feather flock together. In other words, the world is filled with echo chambers.”

To test whether collective intelligence (also known as the “wisdom of the crowds) can succumb to partisan bias, the team conducted two web-based experiments that included 2,240 individuals. The participants were asked to answer factual questions known to elicit partisan bias before and after observing what peers in their own partisan group answered as well — questions like “what was the US unemployment rate at the end of Barack Obama’s presidential administration?”

After reading the averaged response of other respondents, people could revise their answer. To make sure these answers were emerging in politically homogenous networks, each trial consisted of either only Republicans or only Democrats. Becker notes that because the questions were motivated by accuracy, an important note is that these results don’t reflect what would happen in a situation motivated by controversy like one might expect to see on a social media platform.

In turn, the team discovered that social influence increased the accuracy rates of the respondents. When people took into consideration the answers from other participants, their own responses became more accurate — even when the questions were worded in way intended to stoke political bias.

“This study directly challenges the assumption that echo chambers simply reinforce poor information,” Becker says. “We show, at least in our laboratory setting, that homogenous social networks can, in fact, generate collective intelligence.”

He says that now the big question is not whether echo chambers are bad, but when they will amplify existing biases. Much of political polarization, he emphasizes, is affective: People just don’t like each other very much. When tribalism — the idea of my guy versus your guy — gets in the way, how you feel about the facts may become less important.

Becker also notes that this research suggests that by focusing on the communication of factual topics, we can increase the likelihood that collective intelligence prevails. Echo chambers have been called “dangerous” and “hardly conducive to a healthy democracy.” On the other hand, they’ve been labeled as inconsequential to radicalism. What may be more intrusive to political harmony, however, is the idea of “if you win, I lose” and larger, political echo-chambers simply offer a way to interpret what’s accepted already as a fact.

Theories in favor of deliberative democracy are based on the premise that social information processing can improve group beliefs. While research on the “wisdom of crowds” has found that information exchange can increase belief accuracy on noncontroversial factual matters, theories of political polarization imply that groups will become more extreme—and less accurate—when beliefs are motivated by partisan political bias. A primary concern is that partisan biases are associated not only with more extreme beliefs, but also with a diminished response to social information. While bipartisan networks containing both Democrats and Republicans are expected to promote accurate belief formation, politically homogeneous networks are expected to amplify partisan bias and reduce belief accuracy. To test whether the wisdom of crowds is robust to partisan bias, we conducted two web-based experiments in which individuals answered factual questions known to elicit partisan bias before and after observing the estimates of peers in a politically homogeneous social network. In contrast to polarization theories, we found that social information exchange in homogeneous networks not only increased accuracy but also reduced polarization. Our results help generalize collective intelligence research to political domains.

More like this
Culture
Sep. 16, 2022
How an ultra-nationalist religious group became one of the most popular film producers in Japan
By Alicia Haddick
Culture
Sep. 20, 2022
5 amazing sci-fi shows and movies leaving Netflix in September 2022
By Robin Bea
Culture
Sep. 17, 2022
You need to watch the most realistic apocalypse movie of the century on Netflix ASAP
By Jake Kleinman
Related Tags
Share: