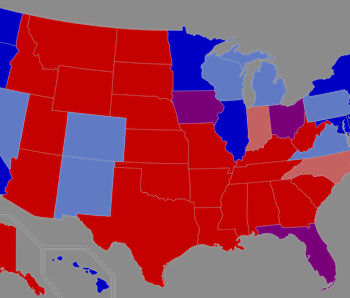 The so-called “filter bubble” on social media, which leads to people seeing only content with which they ideologically agree, has been criticized in recent years for contributing to the polarization of politics. A new scientific study has turned that hypothesis on its head, with Republicans and Democrats faring differently in the research.

It turns out that exposure to opposing views on social media actually increases political polarization, according to the latest research by a team of sociologists primarily from Duke University. The findings were released on Tuesday ahead of their publication in the journal Proceedings of the National Academy of Sciences.

The researchers surveyed 901 Democrats and 751 Republicans for their experiment, making sure to choose people who used Twitter three times a week. They were paid $11 to follow a custom-made Twitter bot that espoused political messages opposite to their own beliefs, and that bot was busy: It retweeted 24 messages a day from “high-profile elites with opposing political ideologies” for a month straight. Crucially, the respondents were not told what sort of messages the bot would retweet.

After the month-long period, 62 percent of Democrats and 57.2 percent of Republicans agreed to be surveyed about their experience. Republicans “exhibited substantially more conservative views post-treatment,” report the researchers.

When it comes to answering why Republicans were much more conservative after the study, the researchers note they couldn’t put their finger on what precisely created the “backfire effect.”

“Increases in conservatism among Republicans may have resulted from increased exposure to women or racial and ethnic minorities whose messages were retweeted by our liberal bot,” the researchers speculate their paper. In the appendix to the paper, they go into greater detail as to why they suspect gender plays a role: “Because there are more female opinion leaders who are liberal than conservative—and because men constitute a larger share of Republican respondents than Democratic respondents—the increased conservatism exhibited by some of our Republican respondents may reflect their beliefs that women should not occupy positions of power.”

The researchers are expectedly cautious about the narrow scope of their research and its findings, adding a few caveats in their paper. Chief among them: “Readers should not interpret our findings as evidence that exposure to opposing political views will increase polarization in all settings. Although ours is among the largest field experiments conducted on social media to date, the findings above should not be generalized to the entire US population, because a majority of Americans do not use Twitter.”

Interestingly, researchers noticed that Republicans dug in their ideological heels deeper after being exposed to liberal messages over the course of a month on Twitter, but Democrats were only slightly more liberal after a month of conservative messages on Twitter, but not to a statistically significant degree.

There is mounting concern that social media sites contribute to political polarization by creating “echo chambers” that insulate people from opposing views about current events. We surveyed a large sample of Democrats and Republicans who visit Twitter at least three times each week about a range of social policy issues. One week later, we randomly assigned respondents to a treatment condition in which they were offered financial incentives to follow a Twitter bot for 1 month that exposed them to messages from those with opposing political ideologies (e.g., elected officials, opinion leaders, media organizations, and nonprofit groups). Respondents were resurveyed at the end of the month to measure the effect of this treatment, and at regular intervals throughout the study period to monitor treatment compliance. We find that Republicans who followed a liberal Twitter bot became substantially more conservative posttreatment. Democrats exhibited slight increases in liberal attitudes after following a conservative Twitter bot, although these effects are not statistically significant. Notwithstanding important limitations of our study, these findings have significant implications for the interdisciplinary literature on political polarization and the emerging field of computational social science.

Correction: The team of researchers is mostly comprised of academics from Duke University. A previous version of this article incorrectly stated the academic institution.

More like this
Science
22 hours ago
25 years ago, NASA landed its first rover on Mars — and catalyzed the search for life
By Doris Elín Urrutia
Science
16 hours ago
NASA just built the best map of Mars to date using 51,000 images
By Evan Gough and Universe Today
Science
13 hours ago
Cosmic phenomenon predicted by Einstein could shatter physics as we know it
By Matt Williams and Universe Today
Related Tags
Share: