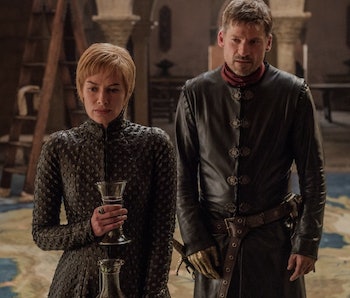 Nine months ago, a series of anonymous Reddit posts claimed to reveal some major details about how Game of Thrones would end. At the time, they were mostly ignored and mocked by the fans who make up the “Free Folk” subreddit community, but as GoT Season 8 comes to a close, many of those alleged leaks have already come true. It looks like this leaker (redditor u/afraidpart) was telling the truth, and a look back at their original posts may reveal some huge spoilers about Game of Thrones Season 8, Episode 5, and maybe Episode 6 as well.

First, here’s a quick rundown of all the details in this nine-month-old Reddit leak (resurfaced by the fantastic Storm of Spoilers podcast) that have already come true in Season 8:

These all turned out to be true. So what else did u/afraidpart leak that we can expect to see in Game of Thrones Season 8, Episodes 5 and 6?

Warning: Huge possible Game of Thrones Season 8 spoilers ahead. This is your last chance to turn back.

Cleganebowl Happens, With a Twist

Unsurprisingly, the Hound and the Mountain (aka Sandor and Gregor Clegane) will finally go head-to-head in the battle we’ve been anticipating for years. Fans even have a name for this showdown: Cleganebowl.

Here’s what u/afraidpart revealed about the fight:

We hope this second one doesn’t come true. We’d like to see Sandor make it through the end of Game of Thrones, but if he dies, at least he’ll get revenge on his dirtbag brother first.

Cersei’s Death May Be Unsatisfying

So it sounds like Cersei will die, but she’ll have a pretty good death in the arms of her brother/lover.

What About Dany and Jon?

In two different posts from u/afraidpart, Daenerys and/or Jon Snow either die or survive. It’s possible Game of Thrones filmed multiple endings to avoid leaks. So definitely take all of this with a grain of salt.

Here’s one leak that seems to suggest Jon will kill Dany:

Danaerys actually DOES die, she’s killed (stabbed I think) by Jon Snow. She goes back to the throne room and touches the throne. Has no idea WHY he kills her, there’s a missing chunk. But it happens in the throne room. I asked him why and he said he doesn’t know and I don’t even think they saw the actual death scene, just the fact that she’s dead. So he’s only assuming she gets murdered, otherwise she commits suicide but that doesn’t make much sense. Then the dragon flies away with her body but doesn’t kill Snow. Either way, she dies.

Beyond that, they also claim that “the dragon enters the throne room and fucks shit up,” which sounds pretty awesome and would fulfill Dany’s misunderstood Season 2 vision.

Additionally, the leaker says Tyrion will eventually give up on Dany and quit his position as Hand of the Queen (possibly after she burns down King’s Landing). Here’s that part of the leak:

When Daenerys is making her speech everyone is mad at her. Tyrion makes some comment (he doesn’t get sound) and throws his pin (?) on the ground and she sends him to the prison? Idk what was going on here.

Arya Stark may have already peaked back at the Great Battle of Winterfell, at least according to these leaks. They claim that “Arya is useless,” which is a bit of a disappointment after she headed off to King’s Landing in Episode 4 with some sort of goal…

Additionally, the leaker notes that “Jon Snow finally sees Arya after they get to the throne.” This one is a bit harder to parse, but we’re guessing it means Jon will see Arya use her Faceless Men training to disguise herself as another person, which she hasn’t done since killing Walder Frey.

“The Iron Throne gets melted by the dragon.”

Good! Down with the Westeros monarchy!!