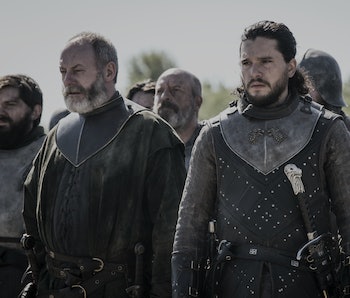 The grand finale to Game of Thrones Season 8 may have already been revealed via a Reddit post that has since been deleted — but we have all of the information preserved. Whether or not it turns out to be true, this could be the greatest possible ending for the series, and it would involve Jon Snow winning the throne but abdicating it to venture North instead.

We can’t confirm if these details are true until the episodes air, but beware of huge potential Game of Thrones Season 8 spoilers.

A lengthy post on the r/gottheories subreddit Tuesday morning was swiftly banned by moderators “due to multiple reports that it is likely from a leak.” Redditor u/mrfreezenightking, who denied those accusations, listed a series of incredibly detailed and wildly entertaining bullet points from Game of Thrones Season 8, Episode 5 with a few hints at the series’ grand finale in Episode 6.

This theory/leak feels very likely, so here’s your last chance to turn back.

Arya, the Hound, and Jaime Lannister all infiltrate King’s Landing through the sewers in Episode 5, and Jaime is imprisoned in the Red Keep.

At Dragonstone, Varys feeds into Daenerys’ paranoia, but she realizes his plans to betray her. She puts Varys and Tyrion on trial, leading to Varys being burned alive while Tyrion is spared. Dany also learns that it was Sansa who revealed Jon’s identity, setting up their conflict in Episode 6.

During the Battle of King’s Landing, Yara Greyjoy’s fleet joins in the fight. Together with Dany riding Drogon, they’re able to surprise and kill Euron. As soon as Euron dies, the Golden Company breaks contract. (Historically, we’ve seen they always choose the winning sides because they’re good investments.)

At this, Cersei panics and frees Jaime, retreating into the queen’s chambers with him and the Mountain. As characters like Jon, Grey Worm, and Davos rush through King’s Landing to the castle, Qyburn tries using wildfire to “burn them all.” Jaime stabs Cersei in the stomach to kill her, echoing Talisa Stark’s murder at the Red Wedding, and he pulls off his face to reveal it was Arya. The Hound bursts in to fight the Mountain, thus fulfilling Cleganebowl.

Daenerys becomes a “Mad Queen” and burns down hundreds of civilians and soldiers, along with the Red Keep. The Hound overcomes his fear of fire to save a wounded Arya. Afterwards, everyone is then convinced Daenerys is unfit to rule.

All of this sets up the final episode, where Dany accuses Bran Stark, Samwell Tarly, and Sansa Stark of treason, forcing Jon Snow to reluctantly proclaim himself Aegon Targaryen and the real heir to the throne. He’d then have to kill Dany and Drogon himself before relinquishing the throne to characters like Sansa, Tyrion, Gendry, etc.

The final note of the series would be Jon reuniting with Ghost at the Wall while Bran uses magic to rebuild the hole in the Wall. Then, as Jon searches for Tormund even further north, he finds dismembered Wildling bodies arranged in the White Walker spiral.

Is this little more than exhaustive fan fiction? Maybe. But maybe not.

Showrunners D.B. Weiss and David Benioff have previously compared the Game of Thrones ending to that of The Sopranos, which ended on an unsettling and abrupt cut to black with no definitive closure at all. If Game of Thrones ended on so much death and misery only for Jon to discover signs that White Walkers still exist north of the Wall, then it would feel like every heroic act these past eight seasons was for nothing.

In a way, doesn’t that feel like the best possible ending?