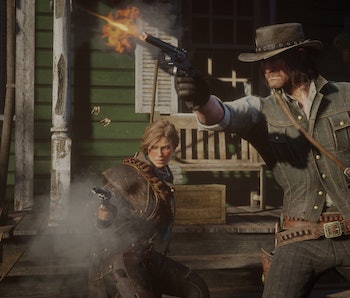 Cloud gaming services like Google’s Stadia and Microsoft’s xCloud have the potential to usher in an era of on-demand gaming. Both services have promised a future where players can access AAA titles seamlessly, no download times or expensive hardware needed. But their ascent may also spell trouble for one of the most beloved game genres.

It’s still unknown how Stadia or xCloud will be priced, but based on currently available cloud gaming platforms, like PlayStation Now and Shadow, they will likely opt for a monthly subscription fee. Google executives and partners have suggested that Stadia might even offer an hourly rate aimed at more casual gamers. But if Netflix-like, all-you-can-eat style business models prevail, that could spell doom for story-driven, single-player games like Red Dead Redemption 2, Fallout 4, and The Last of Us.

Tom Wijman — a Senior Market Analyst at the gaming market analytics firm Newzoo — tells Inverse that, in this new gaming landscape, publishers and developers will be forced to focus on “post-sale monetization” to turn a profit. Many game-makers will likely turn to micro-transactions and expansion-packs to try and make up for the money they would have made by selling their game for $60 a pop. That means even as the technology to create more immersive and expansive virtual worlds flourishes, cloud gaming could incentivize publishers to focus more on concepts that are easier to monetize.

So far, this landscape would a lot more energy being spent on battle royale games like Fortnite and Apex Legends, which are innovative in their own right, but which lack the depth, characterization, and storytelling found in some

“The most profitable games at the moment are free-to-play. Through patching, continuous content additions and in-game monetization, developers and publishers are less likely to crumble under the market pressure if they cannot charge $60 per title,” said Wijman. “At the same time, it does endanger the large-scale single player experiences because those are far more difficult to monetize post-launch than multiplayer titles.”

The global cloud gaming market is expected to be valued at $6.9 billion by 2026, according to a December report by Zion Market Research. If cloud gaming does take off as forecasted, the average gamer will no longer buy individual games for $60. Instead, just like TV and music streaming, they’ll subscribe to cloud services to gain access to a massive games library.

Game developers and publishers stand to make a fraction of the profit per virtual copy played. The fear is that this new model will make masterpiece titles like Red Dead Redemption 2 — which took seven years and an estimated $644.2 million to make — far less commercially viable. Without the ability to charge per copy sold, some analysts argue that developers will be too tempted by the easy money they could make putting out addictive, half-baked titles they can easily iterate upon and riddle with in-app purchases.

The new streaming landscape could also put pressure on the middle, for example titles aimed at more niche audiences as opposed to the greater market. This has been its effect on the music business. Music services like Spotify and Apple Music have led to a significant drop in royalties paid to artists, so most performers have had to turn to concert revenue or other income streams like merchandise to make up for that income loss.

In a new book by the famous Princeton economist Alan Krueger, Kreuger demonstrates that sixty percent of all concert-ticket revenue world-wide now goes to the top 1% of performers ranked by revenue in 2017. In the 1980s, that figure was just 26 percent. When you can’t monetize the content itself by charging money for access to titles, that means even more of the pie going to superstars who can fill the biggest venues, and charge $50 for a tee shirt.

It’s entirely possible that the stream-i-fication of the gaming industry will play out in much the same way, empowering the creators of profitable, Fortnite-style games to make more money than ever before, but leaving smaller, more ambitious, or more difficult to produce games by the wayside.

It’s definitely not too late to avoid having AAA titles devolve into glorified Candy Crush clones. Streaming services, for example, could put specialized royalty payments in place. Stadia could also pay developers according to how many hours a game has been played, which would incentivize more immersive titles (as opposed to titles that simply encourage the most in-app spending). Alternatively, xCloud could broker a deal with developers to make exclusive story games only available on that platform.

Cloud gaming has the potential to bring gaming to a whole new audience. But its ascent will drastically change the incentives for game-makers, which will have huge influence on what kind of games will be made in the future. Thoughtful pricing strategies and royalty payments will be crucial for ensuring that game-makers can still make money producing the ever-more intensive, deeply wrought, and thoughtful titles that game-players have come to expect.

More like this
Gaming
8.9.2022 9:18 PM
Did you know Netflix has games? Here's how to find them
By Robin Bea
Gaming
1 hour ago
Where to find Dragon Ball Capsule Corp locations in Fortnite
By Joseph Yaden
Gaming
8.12.2022 4:15 PM
Fortnite Dragon Ball crossover release date, cosmetics, and leaks
By Joseph Yaden
Related Tags
Share: