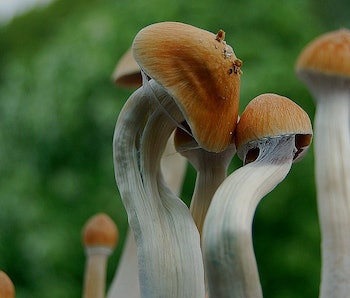 When Denver’s polls closed on Tuesday, Initiative 301 was too close to call. By the next day, it became clear: Psilocybin mushrooms had been decriminalized in the progressive city. It’s a step forward in a national conversation that has found credible scientific researchers giving psychedelic drugs like LSD, DMT, MDMA, ketamine, and, yes, psilocybin, a closer look as potential treatments for our ailing brains.

These scientific studies have put psilocybin specifically — and psychedelics more generally — in front of wider audiences, setting the stage for Denver’s decision. In fact, Decriminalize Denver, the grassroots nonprofit behind the effort, put these studies front and center in its campaign efforts, listing them all on its website so any curious citizen could educate themselves ahead of the vote. And apparently it worked.

This win at the polls doesn’t mean that psilocybin “psychedelic” mushrooms remain illegal will become legal under either Colorado state law or US federal law, but the city of Denver will soon consider this substance a “lowest law enforcement priority.” This means that adults who possess or grow psilocybin mushrooms will not face any criminal penalties, and law enforcement can not devote any tax dollars to enforcing psilocybin use or possession.

Even if psychedelics are not mainstream yet, they’re definitely coming into the center from the scientific fringe. Since 2010, for instance, the American Psychological Association began including panels on psychedelics research at its annual conference. This widening acceptance has helped replace the moral panic that led to President Richard Nixon pushing to make magic mushrooms illegal in the 1970s.

Now, with several university laboratories conducting carefully controlled psilocybin trials on humans for conditions including depression and addiction, societal acceptance appears to be increasing. Nonetheless, psilocybin mushrooms (and their chemical components) remain on Schedule I of the Controlled Substances Act, making them totally illegal — except for FDA-approved labs like the one at Johns Hopkins University. In September 2018, the Johns Hopkins team argued that psilocybin deserves a new legal status, one more in line with Ambien than heroin.

The argument is simple. Since research has shown psilocybin is safe for humans, effective at treating several serious conditions, and non-addictive, then it doesn’t actually fit the criteria for a Schedule I drug: a substance with no medically accepted use and a high potential for abuse.

“This area of regulatory science has the potential to facilitate innovative therapeutic breakthroughs by replacing fear and misinformation with scientifically based conclusions and facts,” they wrote in the paper.

This week’s vote marked one more step forward for these scientifically based conclusions and facts. In Denver, the mood among advocates is jubilant.

“I almost had a fucking heart attack,” Kevin Matthews, the head of Decriminalize Denver, told Denver Westword. “Holy crap, we won against all odds.”

The vote on the ballot initiative was so close that on Wednesday morning, news outlets around the country began reporting it had failed.

But on Wednesday evening, the story changed dramatically. While absentee ballots from military service members overseas still need to be counted, they’re not expected to significantly change the outcome. The margin sits at 50.56 percent of voters supporting decriminalization and 49.44 percent opposing it. That’s a razor-thin margin if ever there was one, but as Dom Toretto famously said, “It don’t matter if you win by an inch or a mile. Winning’s winning.”

And advocates in Denver are wasting no time in helping to ensure that the win stays a win. Matthews told Westword that he’d be calling members of the city government first thing Thursday morning to offer support in making sure the policy goes into effect with as few issues as possible.

Fourteen years ago, Denver became the first US city to decriminalize cannabis possession, but for some time after the law went into effect, police officers continued as if nothing had changed. Matthews and the rest of the folks at Decriminalize Denver are prepared to lodge legal challenges if history repeats itself in that respect. Learning from this past experience, though, the group made sure to include a condition in I-301 that a mayoral task force must convene by 2020 to review law enforcement responses to decriminalization.

Art Way, the Colorado state director of the Drug Policy Alliance, announced on Wednesday that the successful initiative is promising, but that it’s just one small step in the right direction for the country.

“No one should be arrested or incarcerated simply for using or possessing psilocybin or any other drug,” he said. “If anything, this initiative doesn’t go nearly far enough. Given the scientific and public support for decriminalizing all drugs, as Portugal has done successfully, we need broader reforms that can scale back the mass criminalization of people who use drugs.”

More like this
Science
6.28.2022 10:00 AM
How are drugs absorbed in the body? The science of medicine, explained
By Tom Anchordoquy and The Conversation
Science
6.21.2022 10:45 AM
Ancient stalagmites point to a massive drought that upturned 6th century Arabia
By Allison Parshall
Science
6.25.2022 4:00 PM
Voyager: 12 spectacular images from NASA's longest-lasting mission
By Jennifer Walter
Related Tags
Share: