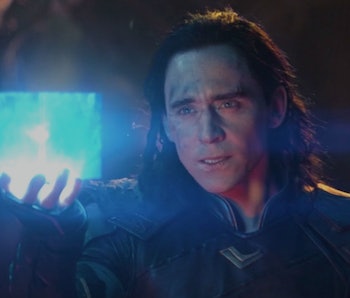 Avengers: Endgame rewrote the rules of time travel, and in doing so may have low-key created at least one alternate universe in the process. The Marvel Cinematic Universe will never be the same now that any future movies or shows could take place in one or more alternate realities, and Endgame offers a major clue that all this time travel nonsense could cause plenty of problems down the road.

The Avengers’ big plan in Endgame involves harnessing the power of the Quantum Realm as a means of time travel. By going back in time, their hope is that they can collect the Infinity Stones and “un-snap” Thanos’ mass genocide in the present. Along the way, however, they inadvertently create a huge plot hole that, for all we know, could go on to have devastating consequences for the future of the MCU — or it may have innocently just created an alternate reality.

During the Battle of New York from 2012’s The Avengers, our heroes successfully claim the Time and Mind Stones but fail to capture the Tesseract (aka, the Space Stone). They interrupt the natural course of events, leading a captured Loki to teleport away using the Tesseract. In the original timeline, Thor took both Loki and the Tesseract back to Asgard, where they remained until the events of Thor: Ragnarok.

But now there’s this divergent timeline where Loki ran off with the Tesseract to do whatever he wanted. Could this be what the Disney+ Loki series is actually about? Maybe.

Just a few minutes after Loki runs off with the Tesseract in Endgame, Professor Hulk barters with the Ancient One at the Sanctum Sanctorum, trying to take the Time Stone. She argues that they can’t remove any of the Infinity Stones from time because together the six Stones create “what you perceive as the flow of time.” During a cool visualization, she points out that removing one could create catastrophic alternate realities.

“If you remove our greatest weapon of defense, you open up this world to all sorts of unspeakable horror,” she says, but that’s more about how the sorcerers use the Eye of Agamotto to combat mystical threats. Permanently removing it from that point in space-time would make Earth vulnerable.

Ultimately, Steve Rogers does return all of the Infinity Stones to their proper places in time, but he goes and creates yet another alternate reality by staying in the past to live an entire lifetime married to Peggy Carter. Then he appears in the present day to give his shield and Captain America title over to Sam Wilson.

“If Cap were to go back into the past and live there, he would create a branched reality,” director Joe Russo told Entertainment Weekly. “The question then becomes, how is he back in this reality to give the shield away?”

By the end of Avengers: Endgame, we’re looking at a total of at least four distinct realities: the original “Prime” reality, a world where Steve Rogers married Peggy Carter, a third created by the Loki-Tesseract debacle, and a fourth where the new Thanos came from. Gamora from that reality now exists in the Prime reality and will presumably play a part in Guardians of the Galaxy vol. 3.

In this fourth timeline, the events from both Guardians of the Galaxy movies won’t happen. At the very least, Thanos and Gamora aren’t around to influence events. So does that mean Ego succeeds in destroying that universe in Guardians 2?

With the second full Spider-Man: Far From Home trailer “confirming” the existence of the Marvel Multiverse, it’s opening up a myriad of different possibilities for the future of the MCU. All of a sudden, Marvel’s claims that Far From Home is actually the end of Phase 3 (and not the start of Phase 4) make a lot more sense if this is the movie turns Endgame’s time travel shenanigans into an established multiverse mechanism that could be used to introduce the Fantastic Four and X-Men down the line.

Avengers: Endgame is now in theaters.