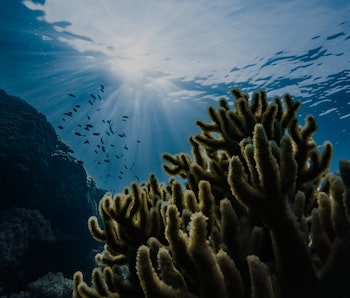 Fish usually get all the credit for being the most abundant creatures in the sea, but the ocean’s actual most plentiful life form is invisible to the naked eye. The ocean is home to millions upon millions of viruses — living organisms that prey upon bacteria and cause marine organisms to develop infections. A study released Thursday is the first to map their global density, showing that there are far more virus populations in Earth’s oceans than previously imagined.

Scientists had previously estimated that there are 10 million viruses in every drop of surface seawater, comprising 15,000 different viral species. Now, a report in Cell shows that there are close to 200,000 marine viral species — a 10-fold increase over those previous estimates. The identification of these populations is the result of a three-year expedition, in which scientists scanned the seas from North pole to South pole; from the surface to 4,000 meters below, cataloging the viral life they encountered.

Ann Gregory, Ph.D., and Ahmed Zayed, Ph.D., at Ohio State University were the primary researchers who analyzed the data containing the raw DNA sequences of viral populations. In turn, they examined the ecological patterns of these viruses and their potential drivers across the ocean. Viruses, they say, play a complex role in the ocean — just as they do on land. Understanding their populations can help scientists understand the future of the world’s seas.

“Viruses control the structure of the microbial communities, as well as their evolutionary trajectories,” Zayed tells Inverse. “Since microbes are the foundation of the food web in the ocean and are responsible for producing a huge portion of the oxygen that we breathe, it is important to understand how viruses impact these microbes and eventually the ocean ecosystem at a global scale.”

Viruses also influence the ocean’s ability to temper the effects of climate change. Microbes move carbon dioxide from the atmosphere to the sea floor, and when viruses infect microbes, they can alter the structure of microbial communities. Since these communities play an essential role in the ocean’s ability to absorb human-produced carbon dioxide, the researchers say the oceans would come to a halt without them.

The hope is that this new, massive catalog can help scientist get a better understanding of the crucial virus-microbe relationship and understand viruses’ collective impact on biogeochemical cycles. New revelations have already emerged: Viral populations seemingly fall into five major groups based on their location and depth, and in different zones of the ocean, there’s evidence of viruses genetically adapting to the specific conditions of their homes.

But the scientists were really interested in where they found the viruses. This study is the first to systematically sample the Arctic for viruses, and it included deeper ocean samples than previously analyzed.

What they found defied expectations.

It’s largely accepted that biodiversity is highest at the equator, and decreases as one moves toward the poles. However, here they found that viral diversity was high in the Arctic Ocean, suggesting that “the Arctic could be an unrecognized ‘cradle’ of viral biodiversity.”

It’s not an exaggeration to say that oceans were the foundation of human life. It’s increasingly obvious that they will play a large role in determining the fate of humanity as well. Scientists need data on the mechanisms that underlie ocean life to know for sure and to prepare for what’s to come, making creations like global maps of viruses essential for tomorrow.

Microbes drive most ecosystems and are modulated by viruses that impact their lifespan, gene flow and metabolic outputs. However, ecosystem-level impacts of viral community diversity remains difficult to assess due to classification issues and few reference genomes. Here we establish a ~12-fold expanded global ocean DNA virome dataset of 195,728 viral populations, now including the Arctic Ocean, and validate that these populations form discrete genotypic clusters. Meta-community analyses revealed five ecological zones throughout the global ocean, including two distinct Arctic regions. Across the zones, local and global patterns and drivers in viral community diversity were established for both macrodiversity (inter-population diversity) and microdiversity (intra-population genetic variation). These patterns sometimes, but not always, paralleled those from macro-organisms and revealed temperate and tropical surface waters and the Arctic as biodiversity hotspots and mechanistic hypotheses to explain them. Such further understanding of ocean viruses is critical for broader inclusion in ecosystem models.