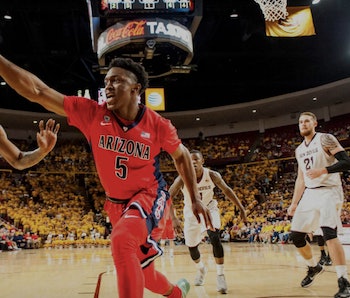 In the chaos beneath the basket, determining who last touched a ball careening out of bounds can be the difference between clinching a national title and walking away with second place. Players will swear up and down that the ball definitely deflected off the other person, regardless of what really happened. According to the authors of a study published Wednesday in Science Advances, that disagreement may have deep roots in the brain, touching at how each person experiences reality differently.

In the paper, Ty Tang, a graduate student at Arizona State University, presents evidence that humans are poorly equipped to make impartial judgements due to a phenomenon called “egocentric temporal order bias” or ETO, a new term coined by Tang and psychology professor Michael McBeath, Ph.D. In the world of basketball, ETO works something like this: if two players touch a ball at the same time, each player is biased to believe that they were the ones who touched the ball first. So clearly, the ball that was flung far into the stands came off of the other guy.

"We were just thinking about strange perceptual phenomena that we experience on a daily basis."

Tang tells Inverse that the basketball example crystallizes a key consequence of ETO — two people will have entirely different experiences of the same event, and they are destined to forever disagree because of it, even outside the realm of basketball.

“We were just thinking about strange perceptual phenomena that we experience on a daily basis,” Tang tells Inverse. “It really resonated with me because I have this friend that I play video games with, and he swears on his life that he did something first, and then something else happened. But it always seemed strange to me. Computers don’t have the ability to lie to you about the order of events.”

The Point of Subjective Simultaneity

To test whether humans really do show a bias to believe that their actions come first, Tang had 16 Arizona State students play a timing game. The game itself seems a bit complicated, but the data it yielded illustrated just how powerful this bias is.

In that experiment, Tang strapped a sensor to each student’s left hand and had them sit across from one another at a table with a divider between them. The students then rested both their right and left hands on the table and were given a simple instruction: After the light goes off, tap the sensor on your opponent’s left hand.

The students played 50 rounds of this game, and then they were asked to make a judgement call. Had they managed to tap their opponent’s sensor first, or did their sensor get tapped by their opponent first?

Using that data, Tang calculates that most of us believe that our actions happen exactly 50 milliseconds before someone else’s. That means that when we truly believe that we experience something simultaneously — say we agree that we both touched the basketball at the same time — the other person probably actually beat us to it.

“If someone touches a basketball 50 milliseconds before you, that’s about the point that you feel like it’s simultaneous,” adds Tang.

Where Does ETO Come From?

In the paper, Tang suggest that ETO is actually part of a larger framework of perception called the constructive model of perception. Each day, we’re actively generating our perception of reality using all of our senses. In the basketball example, that means that we’re either using our sense of touch to gauge when we make contact with that loose ball or making a prediction about how soon we’ll encounter it all in the space of that single moment.

"…this external stimulus that you’re not expecting takes an extra little bit of time to register.”

Then, all of a sudden something unexpected happens — another player also reaches for the ball.

In short, any attempt to figure out who really hit the ball out during a pickup game is probably doomed from the start, and the authors make the case that their findings go a long way to explaining why players will probably never agree.

“Briefly, we have identified what may be a principal cause of arguments in ballgames, and it is about time,” they wrote.

Egocentric temporal order bias will need to be replicated in further studies to determine just how real this phenomenon is. If it holds true, this paper points to a new way of understanding how humans see the world — apparently, with at least a 50 millisecond bias towards our own actions — even outside the realm of basketball.

Abstract: Temporal order judgments can require integration of self-generated action events and external sensory information. We examined whether conscious experience is biased to perceive one’s own action events to occur before simultaneous external events, such as deciding whether you or your opponent last touched a basketball heading out of bounds. Participants made temporal order judgments comparing their own touch to another participant’s touch, a mechanical touch, or an auditory click. In all three manipulations, we find a robust bias to perceive self-generated action events to occur about 50 ms before external sensory events. We denote this bias to perceive self-actions earlier as the “egocentric temporal order” bias. Thus, if two players hit a ball nearly simultaneously, then both will likely have different subjective experiences of who touched last, leading to arguments.