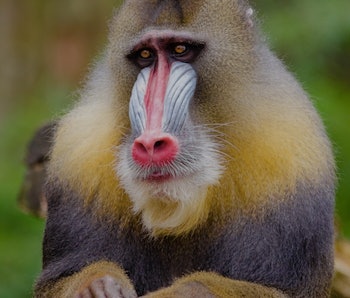 Primates belong to a diverse taxonomic order, all united by one sexy pursuit. The large-nosed proboscis monkey, the large-testicled chimpanzee, and all primates in between want to have as much sex as possible so they can increase the chances of spreading their genes. Scientists reported Wednesday in the journal Proceedings of the Royal Society B primates have evolved different traits to achieve this same sexual goal. A strange repercussion of this process is that “showy” primates actually have the smallest testicles.

"…we can’t jump to the conclusion, as done by a few news outlets, that bearded men have small testes."

Showiness in the primate world can mean many things. In the new paper, researchers explain that showy males — for example, orangutans with the largest framing cheek pads or rhesus macaques with the darkest, reddest faces — have more mating partners than their thin-faced or paler peers.

On the other side of the primate spectrum are the plainer-looking bonobos and chimpanzees. These primates have something the showy primates do not have: large testicles.

So the team, led by Stefan Lüpold, Ph.D., an evolutionary biologist at the University of Zurich, decided to look into this apparent mismatch. He explains to Inverse that after evaluating a data set including 103 primate species, a pattern of an evolutionary “trade-off between ornaments and testes emerged.” The primates with the most pronounced ornamentation — manes, beards, and colorful skin patches — had the smallest testes, while primates with the biggest testicles were the plainest.

Importantly, this study evaluates species of primates to other primates, not primates within the same species group.

“Our study only focused on between-species relationships, so we can’t jump to the conclusion, as done by a few news outlets, that bearded men have small testes,” Lüpold says. “Shaving [beards] won’t make [testicles] bigger.”

For primates whose social mating system is centered around female monopolization — in which all males compete for non-monogamous females — being chosen over other males is the big prize. An evaluation of the primate data set showed that in primate societies where male competition is the most intense, sexual traits become the most pronounced.

But energy is costly, and males can only make limited reproductive investments — it’s hard, Lüpold explains, to have it all. Whether or not a male ends up investing in big testicles or a big beard or nose depends on the primate society it exists in. And the reproductive strategy that works for the males who get to reproduce will be passed down as a selected trait to their progeny.

“In some species, socially dominant males may be able to monopolize access to females, and whatever trait allows males to rise to the top will be under strong selection, as only those who eventually get to mate can pass on their genes,” Lüpold says.

The genes underlying “badges of status” like ornamentation are then passed on and spread in the population over time. But it’s also apparent that, in other species, the social structure can lead to multiple males mating with the same females. This generates a competition between the sperm of male rivals, so males are better off investing their resources in their testicles rather than their “badges of status” because there’s no way they can become an alpha male anyway.

"This finding clearly shows that you can be well-adorned or well-endowed, but it’s hard to be both."

Again, we can consider the chimpanzee, whose testes weigh more than a third as much as its brain. They exist within a relatively promiscuous multi-male to multi-female mating system, so their best chance at reproductive success is having more sperm. Hence, the large testicles.

Social structure also explains why more monogamous primates are less ornamented and have smaller testes than non-monogamous primates. That’s been established in other studies, and is reconfirmed here. Gorillas, for example, have a harem-style mating system in which there’s little competition between the sperm of male gorillas. In turn, gorilla testicles are relatively small and lack, say, the colorful trimmings that mandrill baboons display.

Males must partition their limited reproductive investments between traits that promote access to females (sexual ornaments and weapons) and traits that enhance fertilization success, such as testes and ejaculates. Recent studies show that if the most weaponized males can monopolize access to females through contest competition, thereby reducing the risk of sperm competition, they tend to invest less in sperm production. However, how males invest in sexual ornaments relative to sperm production remains less clear. If male ornaments serve as badges of status, with high-ranking males attaining near-exclusive access to females, similar to monopolizing females through combat, their expression should also covary negatively with investment in post-mating traits. In a comparative study across primates, which exhibit considerable diversification in sexual ornamentation, male weaponry and testes size, we found relative testes size to decrease with sexual ornaments but increase with canine size. These contrasting evolutionary trajectories might be driven by differential selection, functional constraints or temporal patterns of metabolic investment between the different types of sexual traits. Importantly, however, our results indicate that the theory of relative investments between weapons and testes in the context of monopolizing females can extend to male ornaments.

More like this
Science
Jan. 29, 2023
Studying ancient human DNA has unlocked our origins — but the ethics are hazy
By Emiliano Rodríguez Mega and Knowable Magazine
Science
Jan. 29, 2023
Are coyotes dangerous to dogs and cats? Here’s how to keep your pets safe
By Tara Yarlagadda
Science
Jan. 22, 2023
Infection expert answers 7 top questions about Covid-19’s “Kraken” subvariant
By The Conversation and Sameer Elsayed
LEARN SOMETHING NEW EVERY DAY.
Related Tags
Share: